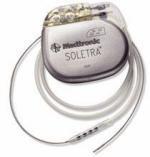 Medtronic system for
brain stimulation
Patients with advanced Parkinson disease (PD) who received deep brain stimulation treatment had more improvement in movement skills and quality of life after six months than patients who received other medical therapy, but also had a higher risk of a serious adverse events, according to a study in the January 7, 2009 issue of JAMA.

Deep brain stimulation is a surgical treatment involving the implantation of electrodes that send electrical stimulation to specific parts of the brain to reduce involuntary movements and tremors. It is the surgical intervention of choice when PD motor (movement) complications are inadequately managed with medications, according to background information in the article.

"However, recent reports highlighting unexpected behavioral effects of stimulation suggest that deep brain stimulation, while improving motor function, may have other less desirable consequences," the authors write. They add that there are few randomized trials comparing treatments, and most studies exclude older patients.

Frances M. Weaver, Ph.D., of Hines VA Hospital, Hines, IL, and colleagues conducted a randomized trial to compare the benefits and risks of deep brain stimulation with those of best medical therapy for patients of a wide age range with PD. A total of 255 patients with PD were enrolled; 25 percent were age 70 years or older. The participants were randomized to receive bilateral deep brain stimulation with leads of the stimulation device implanted in the following locations of the brain: subthalamic nucleus (n = 60) or globus pallidus (n = 61); or received best medical therapy (n = 134), which included management by movement disorder neurologists, who monitored medication use and nonpharmacological therapy (e.g., physical, occupational, and speech therapy).

The researchers found that at six months, deep brain stimulation patients gained an average of 4.6 hours per day of "on" time (the time of good symptom control or unimpeded motor function) without troubling dyskinesia (involuntary movements), while the average change for the best medical therapy group was 0 hours.