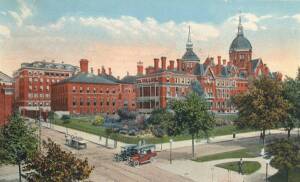 Johns Hopkins
In experiments that pave the way for tiny mobile surgical tools activated by heat or chemicals, Johns Hopkins researchers have invented dust-particle-size devices that can be used to grab and remove living cells from hard-to-reach places without the need for electrical wires, tubes or batteries. Instead, the devices are actuated by thermal or biochemical signals.

The mass-producible microgrippers each measure approximately one-tenth of a millimeter in diameter. In lab tests, they have been used to perform a biopsy-like procedure on animal tissue placed at the end of a narrow tube.

Experiments using the devices were reported in the online Early Edition of Proceedings of the National Academy of Sciences for the week of Jan. 12-16.

Although the devices will require further refinement before they can be used in human beings, David H. Gracias, who supervised the project, said these thermobiochemically responsive, functional micro-tools represent a paradigm shift in engineering.

"We've demonstrated tiny inexpensive tools that can be triggered en masse by nontoxic biochemicals," said Gracias, an assistant professor of chemical and biomolecular engineering in Johns Hopkins' Whiting School of Engineering. "This is an important first step toward creating a new set of biochemically responsive and perhaps even autonomous micro- and nanoscale surgical tools that could help doctors diagnose illnesses and administer treatment in a more efficient, less invasive way."

Today, doctors who wish to collect cells or manipulate a bit of tissue inside a patient's body often use tethered microgrippers connected to thin wires or tubes. But these tethers can make it difficult navigate the tool through tortuous or hard-to-reach locations. To eliminate this problem, the untethered grippers devised by Gracias' team contain gold-plated nickel, allowing them to be steered by magnets outside the body.

"With this method, we were able to remotely move the microgrippers a relatively long distance over tissue without getting stuck, he said. "Additionally, the microgrippers are triggered to close and extricate cells from tissue when exposed to certain biochemicals or biologically relevant temperatures," Gracias said.

The microgripper design -- six, three-jointed digits extended from a central "palm" -- resembles a crab. (In fact, the joint design was inspired by that of arthropod animals.) To fabricate the microgrippers in their initial flat position with all digits fully extended, the researchers employ photolithography, the same process used to make computer chips. When the tiny devices are inserted in the body and moved magnetically, the gold-plated nickel in the palm and digits will allow doctors to see and guide the grippers with medical imaging units such as an MRI or CT.
1(current)
2
3