Supreme Court Rules in Favor of Patient in Wyeth Case 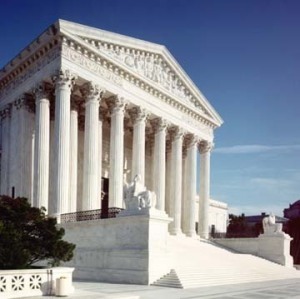 The court has spoken
In a long-awaited victory for patients injured by pharmaceuticals, the Supreme Court ruled 6-3 on Wednesday that a drug company is not immune from injury claims in state court simply because the FDA has approved a product and its labeling.

The decision went in favor of a Vermont woman, Diana Levine, whom the court said is entitled to receive $6.7 million for injuries she suffered after taking the Wyeth drug Phenergan, a nausea medicine.

Wyeth lawyers had claimed that the company provided "ample, lavish warnings" and that Wyeth should not have been held liable, because FDA approved the drug's warning label.

But John Paul Stevens said that Wyeth's reading of the federal regulation was "cramped," based on a "fundamental misunderstanding." Justice Stevens specifically criticized a 2006 Bush administration ruling that banned product-liability lawsuits in cases involving drug labeling.

"It is a central premise of the Food, Drug and Cosmetic Act and the FDA's regulations that the manufacturer bears responsibility for the content of its label at all times," Justice Stevens wrote. He added that that "FDA's action is also "at odds with what evidence we have of Congress' purposes," putting the case, Wyeth v. Levine, No 06-1249, to rest.

The Court's verdict upheld the Vermont Supreme Court decision, which in 2006 rejected Wyeth's argument that it complied with federal law, and yet was being "penalized" by the state's jury verdict for not using a different label.

Levine's medical tragedy began in 2000 when suffering from a migraine; she took Demoral for pain and Phenergan for nausea.

If Phenergan comes in contact with arterial blood, it causes gangrene, so it is given by intramuscular injection, or by intravenous drip. But a doctor used another procedure, injecting the drug into what she thought was a vein, using a technique known as an "IV push." The physician missed the vein and hit an artery, causing gangrene so that doctors were forced to amputate part of Levine's arm.

FDA's approved label warned that "inadvertent intra-arterial injection" can cause gangrene requiring amputation, but it did not contraindicate the "IV push" method.

Justices who voted for Levine said, "Wyeth could have included more stringent warnings against using the IV push. Justices Anthony Kennedy, David Souter, Ruth Bader Ginsburg and Stephen Breyer joined Justice Stevens in his majority decision, while Clarence Thomas, in a rare dissent from the conservative bloc, wrote an opinion agreeing with the ruling.

Bert Rein, A Washington attorney representing Wyeth, said in a statement that the drug company disagrees with the ruling. "Wyeth fully complied with federal law for its labeling," Rein said. He added, "We believe that federal law barred the company from revising its product label as the Vermont court required. We regret that the Supreme Court disagreed."

The ruling was a crucial one for patients, who have been injured but have been unable to receive compensation. In the past, judges have said they would have liked to rule in patients' favor but that federal law prevented them from giving them the compensation they deserved.

The decision is not thought to pertain to medical devices. Read AdvaMed's statement:
https://www.dotmed.com/news/story/8367