CT Scans: Too Much of a Good Thing Can Be Risky 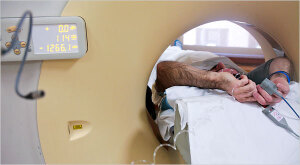 Risk associated
with CT Scan
Patients who undergo numerous CT scans over their lifetimes need to assess whether the benefits of detailed body scanning and accurate diagnoses outweigh the risks of getting cancer, according to a study published in the April issue of Radiology.

The study found that while most patients accrue small cumulative cancer risks from CT scans, 7 percent of the patients in this study had enough recurrent CT imaging to raise their estimated cancer risk by 1 percent or more above baseline levels," said Aaron Sodickson, M.D., Ph.D., assistant director of Emergency Radiology at Brigham and Women's Hospital and researcher at the Center for Evidence-Based Imaging in Boston.

"The techniques implemented in our study can be used to identify higher risk patients who might benefit from enhanced radiation protection efforts," Dr. Sodickson said. According to a 2008 IMV Medical Information Division report, approximately 68.7 million CT exams were performed in the U.S. in 2007, up from 62 million in 2006, he said.

For the study, the researchers developed new methodology to estimate cumulative CT radiation doses and associated radiation-induced cancer risks at the level of the individual patient, by extracting each patient's CT history from electronic medical records and applying standard risk-estimation models that incorporate patient gender and age at exposure.

The researchers used the BEIR-VII (Biological Effects of Ionizing Radiation) risk model to estimate lifetime attributable risk (LAR) of cancer for each patient, based on their CT exposures. Approximately 7.3 percent of the study group had an estimated LAR of greater than 1 percent, meaning that due to cumulative CT radiation exposure, their risk of developing cancer increased by 1 percent above the baseline U.S. cancer risk rate of 42 percent. Among the 315 patients in the top percentile of cumulative LAR, risk increased by 2.7 to 12 percent.
1(current)
2