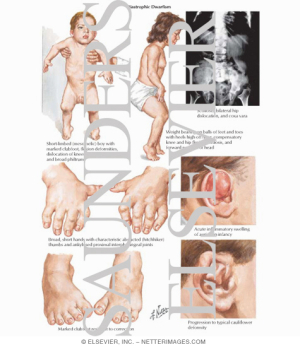 Dwarfism
According to a literature review published in the April issue of the Journal of the American Academy of Orthopaedic Surgeons (JAAOS), treating patients with dwarfism is an extremely complex process. Many treatments that are currently tried should be avoided while other measures are highly recommended, the authors say.

"With so many medical specialties involved, each needs to be aware of all of the symptoms of achondroplasia," says study co-author Eric D. Shirley, M.D, lieutenant commander, Medical Corps, United States Navy, and attending pediatric orthopaedic surgeon, Naval Medical Center Portsmouth, Portsmouth, VA. "Many of these conditions are interrelated."
1(current)
2