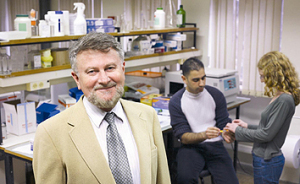 While angioplasty and coronary stents are now the gold standard for re-opening arteries in patients who have suffered a heart attack, it is ironic that stents--inserted to keep the arteries open--sometimes damage the arterial wall and make restenosis more likely.

In an article published March 9 in the journal PLoS ONE, Rubinsky's team demonstrated that IRE "can efficiently, safely and quickly destroy the cells responsible for the restenosis phenomenon in rats," Hebrew University said. The pre-clinical study showed that IRE successfully destroyed almost all of those cells in less than 23 seconds. Clinical trials are currently being designed.

"While the phenomenon of irreversible electroporation was known for decades, a team led by Rubinsky developed a new mode of application that affects only selected molecules in tissue, and as a consequence, it has become only recently rigorously considered in medicine for various applications of tissue removal," Hebrew University says.

Professor Rubinsky is the director of the Center for Bioengineering at the Selim and Rachel Benin School of Engineering and Computer Science of the Hebrew University of Jerusalem. He is also a professor at the University of California, Berkeley.

Prof. Jay Lavee, head of the heart transplant unit at the Sheba Medical Center, Tel Hashomer, is cooperating with Prof. Rubinsky in development of the IRE technique for heart patients.