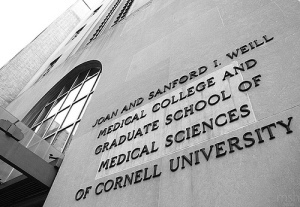 The new device is a vaginal ring that releases multiple types of non-hormonal agents and microbicides, which would prevent conception as well as sexually transmitted HIV infection.

If proven successful in future clinical trials, the new device could empower women to effectively and conveniently protect themselves from unintended pregnancy and sexually transmitted infection. The ring may also someday represent a novel method to prevent STIs for those with aversion to currently available methods, with hormonally derived active agents, or with allergies to latex condoms.


The vaginally inserted ring is incorporated with multiple antiviral drugs that prevent HIV infection and are time-released over a period up to 28 days.

The compounds tested were a newly developed anti-HIV agent, Boc-lysinated betulonic acid, TMC120 (dapivirine), PMPA, and 3'-azido-3'- deoxythymidine (AZT or zidovudine), which, when combined, were found to block infection in human cells exposed to the virus in a laboratory setting.

The ring is also incorporated with compounds that prevent conception by arresting sperm motility, raising vaginal mucous viscosity, and sustaining the acidity of the vagina in which sperm do not survive.

Similar devices have used hormonal compounds that have been linked to increased risk of breast and cervical cancers, or spermicidal compounds that kill sperm, but may lead to irritation and inflammation. Past findings published in the journal Contraception found the device to be highly effective in animal models and in laboratory testing.

The study was supported by grants by the National Institutes of Health, International Partnership for Microbicides and BioRing LLC.

Drs. Saxena and Singh are vice presidents at BioRings LLC and along with Mr. Lerner, president of BioRings LLC, are co-inventors and owners of U.S. and foreign patents on the technology used in this research. Cornell Research Foundation (CRF) owns pending patent applications related to the research.