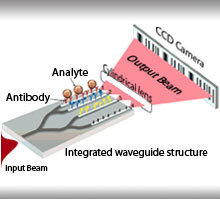 In a new virus-detecting
sensor, waveguides in a
silicon substrate split
light into four
parallel beams.
Members of a USC-led research team say they've made a big improvement in a new breed of electronic detectors for viruses and other biological materials, one that may be a valuable addition to the battle against epidemics.

It consists of a piece of synthetic antibody attached to a nanowire that's attached to an electrical base, immersed in liquid.

If the protein the antibody binds to is present in the liquid, it will bind to these antibodies, immediately creating a sharply measurable jump in current through the nanowire.

The basic principle of nanotube and nanowire biosensors for protein detection was first demonstrated in 2001, but the new design by a team headed by Zhongwu Chou and Mark Thompson of the University of Southern California uses two new elements.

First, it takes advantage of bioengineered synthetic antibodies, much smaller versions of the natural substances that are designed to bind with a specific protein and only that protein.

Second, it uses indium oxide (In2O3) nanowires instead of silicon and other materials previously tried. Metal oxides, according to a new study published in ACSNano, do not, unlike silicon, develop "an insulating native oxide layer that can reduce sensitivity."

The result, according to the paper, is a device that can detect its target molecules with a sensitivity as great as the best alternative modes, more rapidly and without use of chemical reagents. It is also potentially considerably cheaper than alternatives.

"We believe," the authors write, "that nanowire bisensor devices functionalized with engineered proteins can have important applications ranging from disease diagnosis to homeland security."

Additionally, the system can be useful in basis research, in helping to establish certain important parameters for two-part biological systems like the antibody/target protein pair.

The protein the prototype system detects is the SARS (severe acute respiratory syndrome) virus n-protein, which infected more than 8,000 people in 2002-2003, killing nearly 10 percent of them.

The first step was the creation, by Richard Roberts and Mark Thompson, chemists, and their team of the synthetic antibody, including both the active area, design to interact with the protein and, at the other end, a chemical "hook" that would bind it to nanowire at this point and only this point. "This strategy allows every bound [detector molecule] to retain full activity, a clear advantage over antibodies, which [in earlier biosensor designs] are often bound to nanowire surface via amine containing residues randomly distributed over the antibody surface."
1(current)
2