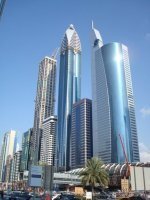 UAE and other Gulf states
invest in health technology
As President Obama tours the Middle East on a diplomatic mission, better business relationships with the Arab world are on the minds of many companies. The wealthy Arab states are expected to invest $60 billion in health care by 2025, a trend that could spell opportunity for DOTmed users.

According to a Financial Times article published on June 1, "Companies on Call as Health Troubles Mount," the Arab Gulf states are investing in expensive medical technologies--such as gastric bypass surgery using robotic techniques-- for their many obese children.

Saudi Arabia and other Gulf states are also trying to stem the incidence of lifestyle diseases like diabetes. Health spending was reported to increase in Saudi Arabia, Qatar, the United Arab Emirates, Kuwait, Bahrain and Oman.

In October, the Saudi Arabian General Investment Authority said it would privatize or outsource the management of all 218 government-owned hospitals. Another 2,000 hospitals or clinics now being built may also be privately managed, according to FT.

If any of our readers is selling into the Gulf, we'd welcome your comments on the business climate for medical refurbishers. Please post your comments below.