Researchers Photograph a Memory in the Making Using Fluorescent Imaging 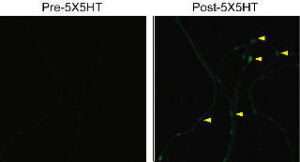 A robust increase in green fluorescence
of dendra reporter protein
represents local translation at synapse
during long-term synaptic plasticity
induced by 5X5HT
Courtesy: UCLA
UCLA and McGill University researchers have, for the first time "photographed" a memory in the making.

The study clarifies one of the ways in which connections in the brain between nerve cells, called synapses, can be changed with experience. The way nerve cells change while engaged in learning activities is called "synaptic plasticity" by scientists, and is the foundation for how we learn and remember.

This is the first study to use fluorescent imaging to visualize the synaptic plasticity and protein synthesis that occurs as we learn.

Understanding synaptic plasticity is critical to understanding diseases in which learning behaviors are impaired, researchers say. Such diseases include mental retardation, Alzheimer's disease, as well as anxiety, depression and a host of other mood disorders.

The research appears in the June 19 edition of the journal Science.

In order to "see" the synaptic changes in the brain, researchers used sensory and motor neurons from the sea slug Aplysia Californica, which can form connections in culture dishes.

The neurons were stimulated with serotonin, which strengthens the synapses, and allows scientists to detect new protein synthesis--the making of a memory--using a "translational reporter," a fluorescent protein that can easily be tracked.

The studies revealed an exquisite level of control over the specificity of regulation of new protein synthesis, scientists say.

"While this was not really surprising to us given the complexity of information processing in the brain," said Kelsey Martin, associate professor of psychiatry and biological chemistry at UCLA and one of the study's authors, "visualizing the process of protein synthesis at individual synapses, and beginning to discern the elegance of its regulation, leaves us, as biologists, with a wonderful sense of awe."