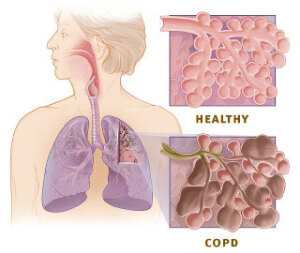 Healthy lungs vs COPD
Source: NIH
Severe chronic obstructive pulmonary disease (COPD) is associated with lower cognitive function in older adults, according to research from Mount Sinai School of Medicine. Researchers compared cognitive performance in over 4,150 adults with and without COPD and found that individuals with severe COPD had significantly lower cognitive function than those without.

The results are to be published in the July 15 issue of the American Journal of Respiratory and Critical Care Medicine.

"Our findings should raise awareness that adults with severe COPD are at greater risk for developing cognitive impairment, which may make managing their COPD more challenging, and will likely further worsen their general health and quality of life," wrote lead author of the study, William W. Hung, M.D., M.P.H., assistant professor at Mount Sinai School of Medicine.

Patients with COPD may experience periods of hypoxia--low oxygen levels--that might lead to brain abnormalities that could reduce cognitive capacity. Alternatively, hypoxia may cause or exacerbate diseases that are characterized by cognitive impairment, such as Alzheimer's disease.

Although past studies have observed a higher rate of cognitive impairment among adults with COPD, the relationship has not been formally tested longitudinally in large populations until now.

To do so, Dr. Hung and colleagues obtained data from the Health and Retirement Study, a national prospective biennial survey of Americans 50 and older. They included data from survey takers who had undergone cognitive testing in 1996 and again in 1998, 2000 or 2002.

Of the 4,150 individuals ultimately included, 492 had COPD, and of those, about one-third (153) had severe disease. Using a 35-point cognition scale, the researchers found that scores among all patients with COPD declined on average by one point over the six-year period between 1996 and 2002.

After further classifying those with COPD as having severe or nonsevere disease, the researchers found that severity and cognitive decline were linked. Even after controlling for sociodemographic characteristics and other confounding factors, the mean cognition scores for those with severe COPD were significantly lower (0.9 points) than those without COPD.
1(current)
2