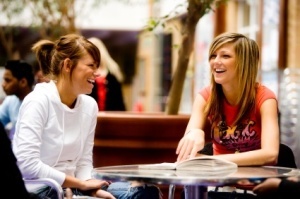 fMRI and social networking
used as research tools
Brain scans of teens sizing each other up reveal that an emotional circuit is activated in teenage girls but not in boys the same age.

The trial by Daniel Pine, M.D., of the National Institute of Mental Health (NIMH) and colleagues, shows how emotional circuitry diverges in the male and female brain during adolescence.

During this time of heightened sensitivity to peer perception, girls are preoccupied with how others view them, while boys are more focused on their status within the group pecking order, researchers have found.

Pine, Amanda Guyer, Ph.D., Eric Nelson, Ph.D., and colleagues at NIMH and Georgia State University, report on one of the first studies to reveal the workings of the teen brain in a simulated real-world social interaction, in the July, 2009 issue of the journal Child Development.

Thirty-four males and females, aged 9 to 17, were told they were participating in a study of teenagers' communications via Internet chat rooms. Researchers told the teens that after they underwent an fMRI scan, they would chat online with other teens from a collaborating study site.

Each participant was asked to rate his or her interest in communicating with each of 40 teens presented on a computer screen, so they could be matched with a partner who also showed a high interest in speaking with them, or that's what the teenagers were told. (The faces were really those of actors, not chatters.)

Two weeks later, the teens viewed the same faces while in an fMRI scanner. This time they were asked to rate how interested they surmised each of the other prospective chatters would be in interacting with them.

When teenage girls were told they were being matched with peers that were interested in them, older teenagers showed more brain activity than younger girls in circuitry that processes social emotion.

The circuits that lit up included: the nucleus accumbens, an area of the brain governing reward and motivation; the hypothalamus, the seat of the emotions that also triggers hormonal (including sexual) activity; the hippocampus, involved in social memory; and the insula, which governs visceral and subjective feelings.

Surprisingly, males' brain circuitry showed little change when sizing up others' interest in them, except for a decrease in activation of the insula. This may reflect a waning of interpersonal emotional ties over time, says Pine and colleagues.

"In females, absence of activation in areas [of the brain] associated with mood and anxiety disorders, such as the amygdala, suggests that emotional responses to peers may be driven more by a brain network related to a positive 'approach' rather than to one related to fear and withdrawal," said Pine. "This reflects resilience to psychosocial stress among healthy female adolescents during this vulnerable period," he says, and also to their readiness to form social networks.

Boys, on the other hand, don't make social connections in the same way, although they do gravitate toward groups, the study found. The fact that teenage boys' circuits weren't inspired by what others think of them, doesn't mean they're not interested, researchers say. Young men might exhibit other brain triggers not yet measured.

Certainly, the high degree of camaraderie known to fuel heroism in young men who value their group standing--such as firemen or soldiers, who often speak of dying not for their country, but for their buddies--is testimony to the fact that males care what others think, and as researchers point out, value their standing in the male pecking order.