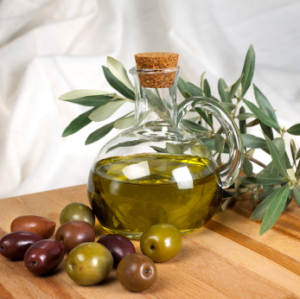 Another argument
for the Mediterranean diet
Oleocanthal, a compound found in extra-virgin olive oil, alters the structure of neurotoxic proteins believed to contribute to the debilitating effects of Alzheimer's Disease (AD), researchers have found.

This structural change impedes the proteins' ability to damage nerve cells in the brain, Paul A.S. Breslin, Ph.D., a sensory psychobiologist at the Monell Center in Philadelphia, says. Monell is a nonprofit research institute.

Breslin, who is also a professor of nutritional sciences at Rutgers, tells DOTmed News that he he and his colleagues discovered that oleocanthal -- like ibuprofen, naproxen and other non-steroidal anti-inflammatory drugs (NSAIDs) -- acts as an anti-inflammatory agent by inhibiting the activity of cyclooxygenase (COX) enzymes.

"Ibuprofen is also associated with a decreased risk of getting Alzheimer's disease when used regularly," Breslin says.

Breslin and William L. Klein, a professor of neurobiology and physiology at Northwestern University, who co-led the research, decided to see whether adding oleocanthal could change the structure of highly toxic proteins, known as ADDLs, that bind within the neural synapses of the brains of AD patients and are believed to disrupt nerve cell function, eventually leading to memory loss, cell death and loss of brain function.

The two scientists found that oleocanthal does in fact alter ADDL structure in a way that deters their binding to synapses.

Klein and his colleagues had identified ADDLs in 1998, leading to a major shift in thinking about the cases and treatment of AD, Breslin tells DOTmed.

Reporting on a series of studies in the journal Toxicology and Applied Pharmacology, Klein's team at Northwestern spearheaded the studies finding that oleocanthal changed the structure of ADDLs by increasing the protein's size.

Knowing that oleocanthal changed ADDL size, Klein and Breslin examined whether the olive-oil substance affected the ability of ADDls to bind to synapses of cultured hippocampal neurons. The hippocampus is that part of the brain involved in learning and memory and is one of the first areas affected by AD.

Measuring ADDL binding with and without oleocanthal, they found that small amounts of oleocanthal reduced binding of ADDLs to hippocampal synapses and protected synapses from structural damaged caused by ADDLs.

An unexpected finding, Breslin says, was that olecanthal makes ADDL's into stronger targets for antibodies. "This action establishes an opportunity for creating more effective immunotherapy treatments, which use antibodies to bind to and attack ADDLs," Breslin says.
1(current)
2