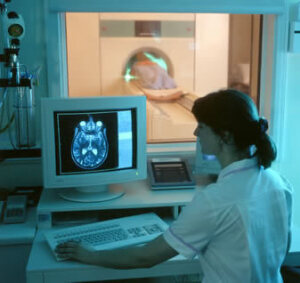 Dose reduction is a priority
for CT manufacturers
Image source: Amber Diagnostics
Yet another tool has been proven effective at reducing radiation from computed tomography angiography scans and CT abdominal scans, this time through an algorithm called adaptive statistical iterative reconstruction (ASIR). In fact, ASIR can reduce radiation CTA dose by 27 percent and CT abdominal dose by 23 to 66 percent, according to two studies published today in the American Journal of Roentgenology.

ASIR was developed by GE Healthcare and introduced in 2008. The studies were independent and not funded by the company. The algorithm, only available on GE technology, is used to reconstruct projection, or raw, data from a scan, in order to reduce the noise. Once the noise is reduced, less radiation can be administered without forgoing a high-quality image.

After the researchers adjusted for other factors that could reduce radiation dose, there was a 27 percent reduction in dose resulting solely from the ASIR technique.

"This is yet another exciting new tool to achieve...diagnosis at a lower dose," Leipsic told DOTmed News. "The image looks as it did [before ASIR], the quality is the same, but at a 30 percent lower dose."

ASIR can not only lower the dose but by removing noise, it can improve the quality of the image.

The algorithm was also successful in slashing dose in CT abdominal scans by 66 percent in some cases.

Researcher Dr. Amy Hara, a professor of radiology for the Mayo Clinic in Arizona, and her team studied two sets of scans, those using the clinic's standard routine and those using the low-dose ASIR technique. Dose reductions varied largely based on patient size, Hara told DOTmed News.

Hara, who specializes in abdominal or body CT scans, is pleased by the low doses ASIR allows.

"In light of all the public concern with CT dose, we're looking at any and every way to reduce dose in our practice but maintain image quality," she said.

Currently, the algorithm is available on two of GE's series, Discovery CT 750 HD and the LightSpeed VCT, but the company plans to make it available on all of its modalities, said DeAnn Haas, general manager of GE's Cardiology Business. The U.S. Food and Drug Administration is currently looking at another GE modality with ASIR.

Haas is pleased with the studies' findings, but really, they only confirm what the company already knew.

"The most important thing in this is the technology that is really beneficial to our patients," she told DOTmed News. "Whenever we can lower the dose, treat patients more appropriately, it's a benefit to the community."