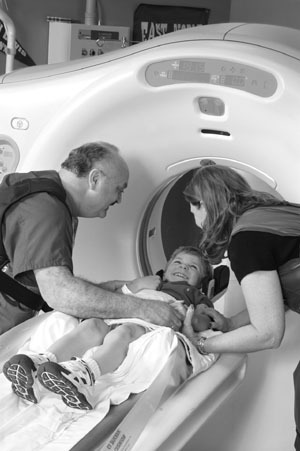 The campaign kicked off in 2007 by the Alliance for Radiation Safety in Pediatric Imaging.

The state's DOH has partnered with the campaign to raise awareness about potential radiation exposure risks from CT procedures and advocate the use of low radiation doses when imaging children.

The education materials are being provided to 16,000 pediatricians and physicians throughout the state, who will then distribute them to parents and patients, the DOH said.

"CT imaging is an effective and widely used diagnostic tool, but it should be performed in a manner that reduces any undue risks to patients, especially children," said the state's health commissioner, Dr. Richard Daines, in a statement. "Parents should be aware of radiation safety issues for children and talk to their physicians about which imaging options are appropriate for their child."

The educational pamphlet includes basic information regarding X-rays and CT scans, their associated risks and the best scanning strategies to reduce risks without compromising image quality. The imaging card will allow parents to track dates and locations of imaging exams, as well as the pediatrician's name and contact information.

"We are very pleased that New York has recognized and promoted participation in the Image Gently campaign," said Shawn Farley, director of public affairs for the American College of Radiology, in an e-mail to DOTmed News.

In order to reduce radiation exposure in the pediatric population, New York's DOH and other health care groups promote using alternative, non-radiation diagnostic imaging such as MRI and ultrasound, limiting multi-slice CT imaging to specified areas and avoiding multiple scans. The department also recommends using the lowest dose of radiation based on factors such as the child's age and size, and encourages CT facilities to obtain accreditation from ACR's CT accreditation program.

"Physicians should carefully weigh the benefits of multi-slice CT scans versus alternative medical imaging procedures when treating children and limit radiation dosages whenever possible," said Daines. "As the use of CT scans continues to grow, we need to ensure that a child's safety remains the top priority."

The number of CT scans performed in the United States is increasing 10 to 15 percent every year. It has grown from 3 million scans in 1980 to 62 million in 2006. About 7 million CT exams are performed on children each year, including 33 percent on children under the age of 10, according to New York's DOH.