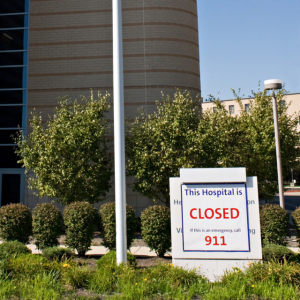 As a favor to a friend, John Baran, a retired PricewaterhouseCoopers partner, sat in on an Auburn Memorial Hospital board meeting to take a look at its financial situation. What he saw wasn’t pretty.

“I saw the place was underwater,” Baran recalls. “I went to the first meeting and said to my friend, ‘Jeez, this place is bankrupt, it just hasn’t filed yet.’”

Baran accepted the position of CFO for the Auburn, N.Y.-based hospital in January 2007 after the interim CFO departed. Having been born at Auburn Memorial, Baran has a special place in his heart for the hospital and wanted to bring it to life again. And even though Baran knew the only way out was to seek Chapter 11 protection, or file for Chapter 11 bankruptcy, he was confident that Cayuga County’s only hospital would not close.

“We knew going in, that our strongest asset was the fact that we were the only hospital in town,” says Baran. “If there were two hospitals, we never would have survived.”

“When you’re starting to run out of cash, you fill up your Visa card and max that out, which is what the hospital did, select vendors and push them out — the ones that squeal the loudest get paid first,” explains Baran. “With the pension plans, no one notices [something is wrong] until the year is over.”

In April 2007, the hospital filed for bankruptcy, ironically the first step in pulling itself up by its bootstraps.

How did we get here?
Of course, the main reason a hospital files for bankruptcy protection is because it ran out of money. But why do hospitals face such financial distress? The driving factor behind Auburn Memorial’s struggles is not uncommon: physicians left the facility for a number of reasons and were not replaced. Without physicians, a hospital can’t treat patients, and cash flow slows or even ceases.

For the hospital, there was a steady decline in admission in the late 1990s and early 2000s as physicians retired and were not replaced. In some cases, physicians were frustrated with management and left, Baran says.

“At the end of the day, the hospital’s customer is the physician,” says Baran. “Physicians admit patients, but you have to have physicians there to treat [patients] in the first place. If you start to lose customers, all of a sudden, expenses exceed revenue. It’s a compounding problem.”

In 2006, new management took over the floundering hospital, and ultimately, the decision was made to file and seek help from the government agency, Pension Benefit Guaranty Corporation (PBGC). The agency is designed to protect employees’ and retirees’ pension programs. In the process of moving pensions to PBGC, only three out of 1,500 Auburn Memorial’s employees or retirees took a pension cut. The three were highly compensated physicians, says Baran.
1(current)
2
3
4
5
6