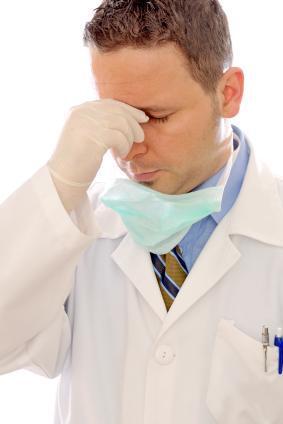 A radiologist's ability to detect fractures in a radiograph and maintain focus dwindled by the end of the day, according to a study published last week in the Journal of the American College of Radiology. Further, radiologists showed increased symptoms of fatigue and eyestrain at the end of the day.

This fatigue and eyestrain, researchers found, could affect diagnostic accuracy.

The radiologists rated positive findings as definite, probable, possible or suspicious and assigned a confidence rating to each, according to the report.

Data was collected twice a day, once in the morning before any diagnostic reading and once in the afternoon after diagnostic reading. The radiologists also completed the Swedish Occupational Fatigue Inventory, which measures fatigue in the workplace. In order to measure eyestrain, the researchers used a special device that collects refractive measurements and pupil diameter measurements every 0.2 seconds.

In order to measure accuracy for fracture detection, Krupinski and her team used an ophthalmologic device to measure the radiologists' ability to focus.

Krupinski noted a "significant drop" in detection accuracy for late versus early reading. The average areas under the receiver operating characteristic curve were 0.885 for early reading and 0.852 for late reading.

While reading accuracy decreased later in the day, reading time remained consistent for fracture detection throughout the day. But the researchers note that the average reading time for normal studies was 56.7 seconds compared to 49.6 seconds for studies with fractures.

"It always takes a longer time reading normal studies," she told DOTmed News. "When you find something, you find something. What radiologists tend to do, when images are normal, they tend to keep looking just to make sure."

The findings confirm what Krupinski has suspected for decades: radiologists become fatigued later in the day. But she pointed out that she studied radiologists just after eight hours of work, and they tend to work 12 to 15 hours a day.

"We found the [fatigue] effect only after eight hours," she said. "Radiologists work closer to 12 to 15 hours, so the effect may be even stronger."

The researchers only studied radiographic exams, and warned that CT and MRI exams may lead to greater fatigue. In Krupinski's next study, she will look at fatigue caused by reading CT studies.

The researchers recommend that with this information, radiologists and residents acknowledge they can become fatigued and take actions to address this, for example, by taking more breaks throughout the day.

Krupinski said she isn't concerned about these findings, because "everybody knows that everybody gets fatigued."

"I'm not worried that at the end of the day all radiologists are horrendous," she joked. "It's an effect, not a huge effect, but it does exist."