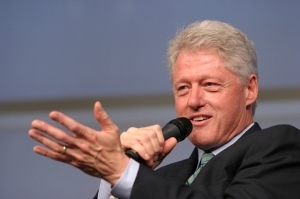 President Clinton spoke to a
packed auditorium at RSNA
President Bill Clinton made his long-awaited speech at RSNA 2010 on Tuesday, November 30th, to a packed Arie Crown Theater in McCormick Place and overflow crowds at multiple closed circuit broadcasts. The audience was restricted to radiologists and medical professionals only.

Seizing the opportunity to address such an influential group, the president focused on the world-wide issue of cancer and its detection and treatment. In particular, he spoke about the serious lack of resources and effort being directed toward combating the disease in developing countries.

Juxtaposing the cutting-edge technology that is a major draw at RSNA against the fact that many poor countries have a weak or non-existent health care system, Clinton emphasized education and prevention were essential in this effort.

Clinton proposed that a global effort be launched to combat cancer in poorer countries in the same way the fight against AIDS has been undertaken, referencing the Clinton Health Access Initiative as a model that has strengthened health care systems globally to care for and treat people with HIV/AIDS and other diseases.

The address was followed by a Q&A session moderated by RSNA President Dr. Hedvig Hricak, The audience gave the president a warm and rousing round of applause at the start and end of the presentation.