This Month in Medical History: The "American Nobel" of ophthalmology is born 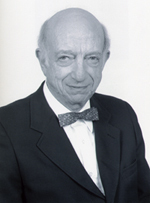 Image courtesy of Johns Hopkins
In the mid-20th century, doctors were puzzled by a common form of blindness among premature babies, now known as retinopathy of prematurity, or ROP.

In fact, Patz was up against a hostile crowd -- many nurses and doctors believed any attempts to prove his then radical hypothesis would harm, rather than help, the fragile newborns. Even the National Institutes of Health denied Patz’s initial request for a grant to investigate the oxygen dose as the culprit of blindness.

But by going against the grain, Patz was able to prove his claim true. The results of his experiments drastically reduced blindness among premature newborns nationwide. By the time he passed away in 2010, Patz was dubbed the “American Nobel” for his contributions to ophthalmology, having rightfully solidified his place in medical history.

Patz was born on June 14, 1920 in Elberton, Ga. His father, a Lithuanian immigrant, made sure Patz and his six siblings were raised according to Jewish custom – his being the only Jewish family in the rural town.

After graduating from Emory University with a medical degree, Patz transported patients between Virginia and Washington as part of his service in the ambulance corps during World War II.

Between trips, Patz found out about a vacancy in the eye clinic of a hospital in Washington and began working through his residency in ophthalmology. During his training, he encountered several infants with ROP, all of whom had received high oxygen therapy. (The continuous doses of oxygen were administered through a cone formed from a folded X-ray film.)

Patz discovered that the infants had an unusually high growth of blood vessels in their eyes, which damaged the retina and often resulted in blindness.

Patz and another doctor hypothesized the oxygen was toxic to infants in the levels it was delivered. With no financial support or adequate clinical research training, Patz decided to test his theory. To fund the trial, he borrowed money from one of his brothers.

But even then Patz's experiment was nearly disrupted, although by good intentions. Two nurses who participated in the study feared they would hurt the babies and so they intentionally increased the oxygen levels that were being delivered to the infants. (After a lecture on the importance of the experiment, they both committed to following the protocol.)
1(current)
2