For biomeds, the latest test equipment lightens the load 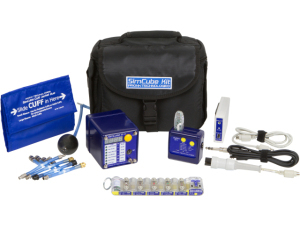 The thought of a biomedical technician often evokes an image of someone tucked away in a hospital basement, tinkering with a piece of medical equipment.

That perception might have a ring of truth, but as the professionals responsible for the upkeep of medical devices, biomeds also regularly survey the facility’s floors.

“We’re out and about through the hospital quite a bit, doing both preventative maintenance and answering service calls,” says Mark A. Luebbe, a senior biomedical technician with Alegent Health, Immanuel Medical Center in Omaha, Neb.

And in today’s health care environment, the responsibility of fixing and maintaining medical equipment is arguably more demanding than ever.

In response to the national focus on care quality, federal device regulators are upping enforcement and issuing stricter rulings. And at the same time as manufacturers are racing to bring cutting-edge technologies to the market, hospitals are looking for ways to trim their budgets.

The convergence of these factors means that biomeds have to do more with less, driving the trend of high-performance, regulatory-compliant testing, Dominic Ivankovich, general manager of Fluke Biomedical, told DOTmed News in an e-mail.

A healthy market
Despite the cost and efficiency pressures on biomeds, test equipment companies say business has been stable or growing over the past year. In part, their sustained success can be credited to how the companies are responding to the needs of their customers in a strained financial and regulatory environment.

For instance, Fluke has upped its engagement with customers worldwide by introducing the Fluke Biomedical Advantage, according to Ivankovich. The program is a free training platform that includes hands-on and online training, as well videos and demos to help biomeds stay up-to-date on their skills.

BC Group International, Inc., a major manufacturer and distributor of test equipment, prides itself on offering customers a “one-stop approach,” says Mike Clotfelter, the company’s vice president of business development.

In addition to offering equipment manufactured by BC Group, the company also sells products from about 80 different manufacturers. “We try to give our customers as many choices as possible,” says Clotfelter.

Take BC Group’s PS-2200 series of multi-parameter patient simulators, for example. While each model offers ECG, blood pressure, respiration and temperature simulation, customers can choose a unit with one, two or four independent blood pressure outputs. The variety of options allows biomeds to get exactly what they need.
1(current)
2
3
4
5
6