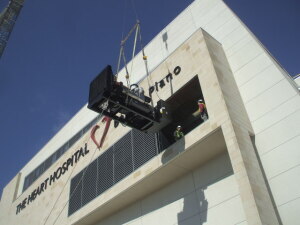 For an industry all about moving, the relocation industry doesn’t seem to be budging much. But changes that appear insignificant now, including rising fuel prices, regulatory modifications and advancements in relevant technology, could eventually lead to monumental transformations for the sector.

The outlook has been “cautiously optimistic” for the U.S. freight transport sector in 2011, according to a recent report by research company Business Monitor International. The Japanese earthquake and a hike in oil prices surrounding the Middle East and North Africa crises offset payroll tax cuts agreed to in December 2010; with key future risks including the possibility of further fuel cost increases due to continued unrest in oil producing countries, raising domestic energy costs and halting consumer recovery – a situation that BMI stated does not bode well for the freight transport sector.

Bill South, president of Avatar Relocation Inc., tells DOTmed News he too believes the freight transport sector has hit a rough patch of road, particularly in relation to medical cargo.

“The used medical equipment transportation business has been off in 2011,” he said. “I can only attribute this to economic factors and the uncertainty in health care at this time. For a lot of transport companies, business is shrinking.”

One diminishing freight shipping business is Holman Moving Systems, with business down 2 to 5 percent from 2010.

“We assume it’s the economy, but it’s hard to know for sure,” said Greg Stratton, Holman’s director of special services.

With medical devices decreasing in size, demand for bigger freight carriers may also be on the wane.

“Smaller and smaller equipment means that UPS and FedEx are often a more viable option, but the value and sensitivity of the items hasn’t changed, so handling is as important as ever,” said Todd Partridge, vice president of operations for MoveIt, a specialized freight logistics company.

Adding fuel to the fire
Rising fuel prices are a having a major impact on the transport industry as a whole.

“We’ve had to add a fuel surcharge to shipments to soften the blow of fluctuating prices, so customers have seen some cost increases,” said Stratton.

Increased fuel prices have also prevented Avatar from improving profit margins during the past five years.

“Because of fuel, as an industry we haven’t had the ability to raise our overall prices, which is a real problem,” South said.

When comparing land, air and sea cargo costs, trucking is often the most cost-effective way to ship medical equipment, while air transport has a reputation for being the priciest.
1(current)
2
3
4
5
6