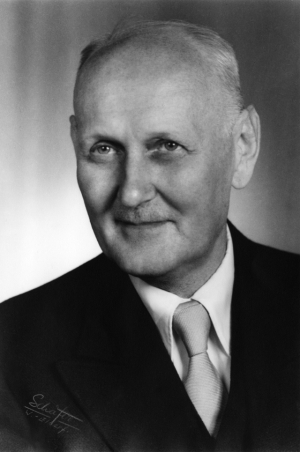 It was a mere powder that enabled countless American soldiers to escape death’s icy grip during World War II. A first aid pouch strung to each soldier’s waist belt contained a package of sulfa powder, allowing the men to swiftly pepper open wounds and fight off infection with ease; even combat medics considered sulfa drugs their go-to first aid component on the field. Gerhard Johannes Paul Domagk – founder of Sulfonamidochrysoidine (marketed under the brand name Prontosil), the first commercially available antibiotic – was the German pathologist and bacteriologist behind this life-saving substance.

Born in the picturesque Lagow, Brandenburg in Oct. 1895, Domagk’s interest in antibiotics peaked during World War I, while on the job as a field physician. It was serving in Russia’s cholera hospitals that Domagk noted fellow medics’ ignorance towards treating infectious diseases including cholera, typhus and diarrhoeal infections. The utilization of surgery as a treatment for these diseases had little to no effect, and radical treatments, including amputations, were usually accompanied by even more life threatening infections like gas gangrene.

Domagk was determined to find a solution to these obstacles. Upon returning to Germany after the war, he completed his medical studies at the University of Kiel, graduating in 1921. Three years later, he became a pathology lecturer, researching bacteria-caused infections at the University of Greifswald, and held the same post the following year at the University of Munster. From here, he went on to do research in experimental pathology and bacteriology at the then-new Bayer, a subsidiary of I.G. Farbenindustrie, a German company at Wuppertal- Elberfeld. His chief chemists, Fritz Mietzsch and Joseph Klarer, would synthesize organic compounds and Domagk would test the compounds’ activity against organisms, in laboratory animals and cultures.

In 1932, he found that Prontosil, a red dye component, eliminated streptococcal and tuberculosis bacteria in mice. So confident in his new formula, the first human Domagk tested it on actually ended up being his own daughter, in a last-ditch attempt to save her life from a deadly streptococcal infection. Miraculously, she promptly recovered.

Once his findings were published in 1935, doctors and researchers around the world became aware of Prontosil sulfonamide group’s advantages and began developing derivatives. Effective treatments for meningitis, pneumonia and other bacterial diseases were now available through a revolutionary new class of drugs.
1(current)
2