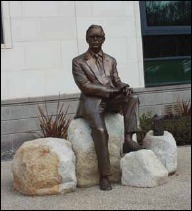 Thousands of heart attack survivors across the globe owe their lives to James Francis Pantridge (October 3, 1916-December 26, 2004), inventor of the portable defibrillator. Delivering a controlled electric shock to the heart, Pantridge’s device is responsible for saving 40 percent of the heart attack victims under the age of 65 it’s used on.

During the second half of World War II, the future“Father of Emergency Medicine” could be found wasting away in the unforgiving slave labor and death camps of the Burma-Siam railway and Tanbaya. Protein deficiency led the young Irish medical officer to develop the often deadly cardiac beri-beri, perhaps inspiring a lifelong interest in heart disease.

After his liberation in 1945, he worked as an adjunct lecturer in the anatomy department of Belfast’s Queen’s University, researching the affliction that had nearly claimed his life. President Lyndon Johnson’s cardiologist and the world authority on the electrical measurement of heart disease, Frank Wilson, soon took Pantridge under his wing when he won a research fellowship to the University of Michigan. Later, Johnson would suffer a heart attack during a visit to Charlottesville, Va., only to be rescued by Pantridge’s pioneering work.

But after working with Wilson for a short time, he returned to Northern Ireland as a physician at the Royal Victoria Hospital. It was there that the chief of medicine’s suggestion about heart attack victims receiving medical aid at the scene of the attack would serve as inspiration for Pantridge.

Historically, a main power supply had been the only way hospital-based defibrillators operated, so Pantridge and his colleague, Dr. John Geddes, set to work, developing the portable defibrillator in 1965. Powered by car batteries and weighing as much as the average man – around 155 lbs -- the first version of the device was still bulky, but by 1968, Pantridge had refined the instrument -- a bright red object the size of a large transistor radio -- down to a mere 6.6 pounds, incorporating a NASA-manufactured miniature capacitor.

He went on to install the portable defibrillator in a Belfast ambulance, which was converted into a mobile coronary care unit. He pushed to have more of these vehicles equipped under what would be called the Pantridge Plan. Although this plan was adopted in emergency service departments elsewhere in the world, it was not until 1990 that funding was made available to equip all frontline ambulances in England with the equipment.
1(current)
2