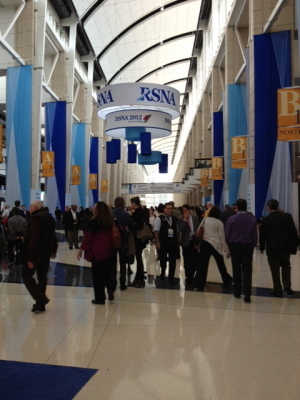 Attendance at the Radiological Society of North America's 2012 annual meeting in Chicago fell 9 percent, according to the audited tally released this week. The results broadly match up with preliminary attendance findings published shortly after the show wrapped up last month.

The reason for the dip in attendance isn't known, but a guest policy change along with a stuttering world economy and a perceived lack of major technological breakthroughs are likely to blame, according to industry observers.

The biggest drop in numbers came from guests. Guest or "other" registration fell nearly one-third, from 9,366 last year to 6,336 now. This perhaps isn't too surprising, as RSNA said it instituted a guest registration fee for the first time at this year's show.

"That's probably the biggest kicker in all of this," Steve Drew, assistant executive director of scientific assembly and informatics with RSNA, told DOTmed News.

Still, there was some good news. Total RSNA member attendance — including associate members, medical students and members in training — actually inched up 1 percent, from 11,970 last year to 12,092 this year, Drew said. Also, radiologist attendees held pretty flat, dropping about 1 percent from last year's record of 16,272 to 16,045.

Why did attendance dip? Drew said RSNA was sending out surveys to find out, but no one knows so far. "We really don't have definitive answers for that," he said.

But he said in discussions with exhibitors and others the stormy global economic climate came to the "top of everybody's list."

"I'm just thinking not only the economic state of affairs in the States but globally, if you look at everything going on in Europe," he said. "I just really think it's probably that as much as anything."

He also said exhibitors told him they have been seeing a "lull" in the industry, a lack of major clinical or technological breakthroughs. This is an observation echoed by Frost & Sullivan analyst Nadim Michel Daher, who in a webcast called 2012 "another slow year for technology innovation in medical imaging" and indicated that could have depressed attendance numbers.

Drew said vendors told him new (but unnamed) technologies and techniques are on the horizon. Presumably, they'll be announced and marketed over the new few years, Drew said, and that could lead to a registration rebound.

"Hopefully, we would see a comeback in that regard," he said.