Let me pick your brain: the history of prefrontal lobotomy 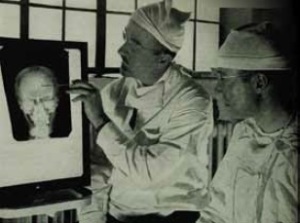 From the November 2013 issue of HealthCare Business News magazine

Today, most people would agree with the joke “I’d rather have a free bottle in front of me than a prefrontal lobotomy.” But for more than half a century, a lobotomy was no laughing matter and a somewhat common method of treating mental illness as well as other ailments like back pain, despite its tendency to cause permanent damage.

The first documented treatment was performed on Nov. 12, 1935 in Lisbon by Portuguese neurologist Antonio Egas Moniz. He called it leucotomy, from the Greek for “cutting white” because it targeted the brain’s connective white matter. With leucotomy, Moniz attempted to alter a patient’s behavior by drilling two holes in the skull and injecting pure alcohol into the frontal lobes of the brain to destroy the connective tissue. The treatment was based on research going back to the 19th century that found a link between the frontal lobes and behavior. For example, patients who had brain tumors removed from the frontal lobes experienced reduced mental health symptoms, at least according to the medical literature of the time.

Moniz considered the procedure on his first patient, diagnosed with depression, to be a success, though she never left the hospital where the surgery was performed. Moniz treated his next seven patients in a similar way, using a surgical tool instead of alcohol to make the disconnection in his ninth patient.

American neurologist, Walter Freeman, met Moniz at a London neurology conference and was inspired by his work. On September 14, 1936, the procedure arrived in the United States. Along with his partner, neurosurgeon, James Watts, Freeman began performing what he called prefrontal lobotomy by surgically snipping the nerves connecting the prefrontal cortex to the hypothalamus. Later, Freeman would modify the procedure and insert an ice pick-like tool through the eye socket and into the brain with only the use of local anesthesia, a method Watts did not approve of. He eventually distanced himself from Freeman.

Freeman believed that cutting nerves in the brain would calm the patient and eliminate extreme emotions, a result he sometimes got. Overall, results were mixed; while some patients felt cured, others were reduced to a vegetative state.

Still, around 50,000 people in the United States received lobotomies, the majority of them between 1949 and 1952. Although lobotomies were criticized in scientific literature as early as the 1940s, they rose in popularity despite their dubious results in part because of a lack of alternative treatment for mental disorders. Moniz even won the Nobel Prize for Medicine in 1949 for his work.
1(current)
2