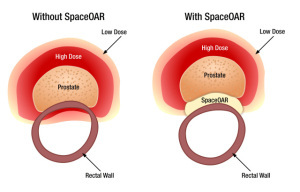 Augmenix, Inc. announced yesterday that its prostate cancer spacing device, SpaceOAR System, received FDA approval. According to the company, this is the first device cleared in the U.S. that protects the male rectum during radiotherapy treatment.

Hydrogel, in the form of liquid, is injected using a small needle and transforms into a soft gel that fills the space between the prostate and rectum. It keeps its shape until the radiotherapy treatment is finished and then liquefies and is excreted from the body in the patient’s urine.

“Shielding the rectum from radiation may enable the utilization of dose escalation (more prostate radiation for improved cancer kill rates) and hypofractionation (fewer radiation treatment sessions), both of which should have substantial patient benefits and help reduce health care costs,” Dr. John Sylvester of Lakewood Ranch Oncology in Bradenton, Florida, and a principal investigator in the SpaceOAR clinical trial, said in a statement.

Prostate cancer is the second leading cancer in American men, second only to skin cancer, according to the American Cancer Society. In 2015, there have been about 220,800 new cases of prostate cancer and an estimated 27,540 deaths from it.

The FDA clearance came on the heels of the completion of a prospective, multi-center, randomized clinical trial. The trial found that patients who underwent radiotherapy with SpaceOAR had significantly less rectal radiation dosages and less severe late rectal toxicity compared to the control patients.

The full pivotal clinical trial results have been submitted to a peer-review journal and are expected to be published later in the year. The system already has a CE mark and TGA approval.