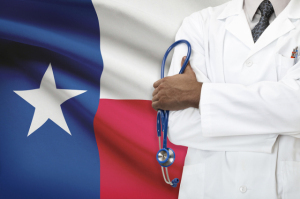 Since enrollment for the ACA started in September 2013, the rate of uninsured adults in the U.S. dropped by 41 percent, but the rate in Texas only declined by 21 percent, according to a new report from Rice University's Baker Institute for Public Policy and the Episcopal Health Foundation (EHF).

"The good news is that Texans, like all Americans, saw meaningful drops in the rates of uninsured since the ACA began," Elena Marks, president and CEO of the EHF, said in a statement. "However, Texas still has the most uninsured adults in the nation, and Texans with the lowest incomes continue to get health-insurance coverage at a rate far below anyone else."

The uninsured rate for low-income adults in Texas decreased by 15 percent, which was the smallest decline of any group in the state. Almost half of Texas residents with household incomes below $27,000 a year are still uninsured.

The ACA's goal of providing insurance for the poorest Americans was carried out through Medicaid expansion, but Texas decided not to expand Medicaid and as a result about one million Texans are left without access to affordable health insurance. Vivian Ho, the chair in health economics at Rice's Baker Institute, said that if Texas doesn't either expand Medicaid or develop an alternative system for coverage, the residents with the lowest incomes will remain uninsured.

Texas did, however, experience some success among the Hispanic population. That population had the highest uninsured rate in Texas, though they are not seeing the greatest gain in health insurance coverage — the rate of uninsured decreased from 39 percent in 2013 to 29 percent in 2015.

"This is still an important development for Texas," said Marks. "The state has had a stubbornly high rate of uninsured residents for many years."