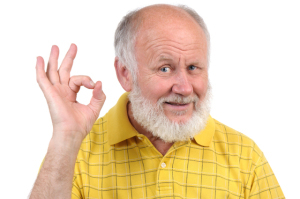 Men with small, microscopic prostate cancers may be able to skip surgery and radiation altogether and just be carefully monitored by urologists — without the risk of dying from their disease or having it metastasize.

The results of 20 years of research at the Brady Urological Institute at Johns Hopkins in Baltimore show that most men with unaggressive prostate cancer, who were only monitored, did not die from their cancers. In fact, only two of 1,298 men in the study – with the average age being 66 – actually died of prostate cancer and only three developed other tumors.

“When we started this, there was a tremendous amount of criticism from outspoken individuals who thought we would be harming people because we weren’t doing anything but monitoring them,” said Dr. H. Ballentine Carter, in a phone interview. He is the Bernard L. Schwartz Distinguished Professor of Urologic Oncology and director of adult urology at Johns Hopkins.

As time went by, the researchers reported outcomes that looked promising.

“Now that we are reporting our good news, it’s ironic that people will write or tell us, ‘Well, of course. It’s obvious that we should be monitoring these people.’ But it wasn’t obvious in 1995,” Carter said. “Back then, no one was being monitored. But patients are voting now with their feet, and opting when safe not to pull the trigger and have surgery or have radiation.”

The men selected for the study 20 years ago had very low grade and microscopic cancers. Carter’s impressions were always that these cancers would never cause them harm. Radiation and surgery, however, can have great side effects that do harm men’s quality of life in terms of bowel, urinary and sexual problems, he said.

“There are other issues as well, when surgery or radiation are chosen. A Scandinavian study showed that one in five individuals who undergo radiation or surgery for prostate cancer will be admitted over the next five to six years for something related to the original treatment,” he added.

According to the American Cancer Society, more than 220,800 new cases of prostate cancer will be diagnosed this year. About 27,540 deaths will happen because of this disease, which makes it the second leading cause of cancer death in men, behind only lung cancer.

The men in the Johns Hopkins’ study who underwent active surveillance came to their doctor every six months for blood tests and exams. They also underwent annual biopsies until they were age 75. But Carter said doctors no longer require biopsies among the lowest risk groups.

“We’ve learned a lot over the years. And as time goes by, we have learned not to make it such a burdensome task of being monitored,” he said.

Most of the men in the study were Caucasian, and Carter believes the more positive outcomes would not be replicated for African-American, whose prostate cancers are more aggressive.

Carter approximates 30 to 40 percent of men with eligible prostate cancers opt now for active surveillance in the United States, compared with Scandinavian countries where the option is selected by as many as 80 percent. The fear of losing their chance to be cured of the disease might be the reason American men are choosing the option less often, he said.

“Some people are just not meant to pursue surveillance because they can’t live each day knowing they are living with cancer inside them,” Carter said. “It’s just something some people can’t handle.”