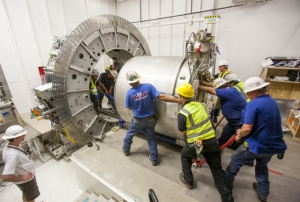 MR linac
The University of Texas MD Anderson Cancer Center, Elekta and Philips have partnered to install the first high-field, 1.5 Tesla MR-guided linear accelerator (MR linac) in the U.S. The system is expected to begin operating for research purposes early next year.

MR linacs capture detailed MR images of tumors and surrounding normal tissue during radiotherapy procedures. The images are used to help clinicians evaluate the therapy while it is occurring, which can potentially lead to better outcomes.

Philips chose to build its 1.5 T MR into the system because they believe it provides the best balance between image quality and spatial integrity. A representative from Philips told HCB News it’s very challenging to combine a high-field MR system with a high-performance linear accelerator, but the company developed novel designs for the MR magnets and gradient coils to overcome any problems.

MD Anderson renovated its existing radiotherapy vault earlier this year and on August 1, Elekta started delivering and installing the components. They recently completed the final step successfully, which involved rising the MR magnet up to its operational field strength.

At the end of 2014, Elekta and Philips installed the world’s first MR linac at the University Medical Center Utrecht (UMC Utrecht) in the Netherlands. To date, they have successfully conducted all proof-of-concept tests on the system and all performance specs have been met or exceeded.

Elekta is anticipating delivery of MR linacs to the first commercial purchases in 2018, and by 2019 they expect to have about 75 systems installed around the world.