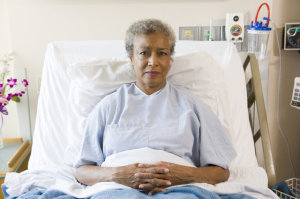 Getting breast cancer as a minority woman, especially an African-American woman, can mark the beginning of a dangerous journey. A new study has found that these women were more likely to have aggressive subtypes of breast cancer, are also more likely to receive substandard care once they are diagnosed, and are ultimately more likely to die from the disease.

“The findings weren’t surprising,” Lu Chen, the author of the study, told HCB News. She is a researcher in the Public Health Sciences Division at Fred Hutchinson Cancer Research Center in Seattle.

“But our study was to see how these disparities vary from cancer subtypes.”

Many studies in the past have illustrated that African-American, Hispanic white and American Indian women had a higher probability of being diagnosed at advanced stages of breast cancer than other women. They are also less likely to obtain the recommended treatments and more likely to die from the disease.

In recent years, Chen said that research about the molecular and genetic characteristics of breast cancer has helped improve treatment and saved more lives. But it’s hard to treat patients who aren’t even getting diagnosed or getting diagnosed at a much later stage in the cancer’s progression.

“The treatment for breast cancer is currently dependent on the type of breast cancer, defined by the estrogen receptor, progesterone receptor and HER2 status,” she said. “This is the reason why we think it’s important to look at the disparities by subtype.”

Hispanic white women were 30 to 40 percent more likely to be diagnosed at stage 2 and/or stage 3 across all breast cancer subtypes.

“Even with all the improvements in breast cancer survival, survival is better if caught at an early stage — at a later stage, not so much. The patient isn’t benefiting from all the treatments out there,” Chen said. “Given the racial and ethnic disparities, targeted, culturally appropriate interventions in breast cancer screening and care have the potential to reduce the disparities and close the existing survival gaps.”

The reasons why these women are getting diagnosed at a later stage has been researched in other studies, she said. Some of them pointed to lack of access to health care, poverty and low education levels.

“Breast cancer is a complex issue. You can’t just fix one thing,” Chen said. “It needs actions in different areas across different disciplines. And we need more research. The more we know about how and why these things occur, then our actions will get better. We are hopeful things will change.”

Chen’s study was published in Cancer Epidemiology, Biomarkers & Prevent – a journal of the American Association for Cancer Research.