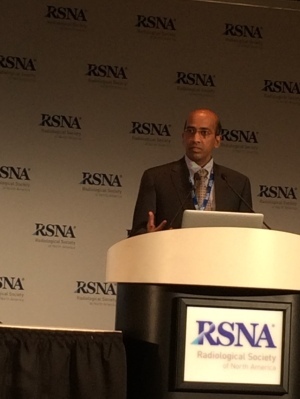 Dr. Rajesh Krishnamurthy
speaking at a press conference
Surgeons at Texas Children's Hospital in Houston have successfully separated conjoined twins fused at the chest, abdomen and pelvis for the first time with the help of CT imaging and 3-D printing technology, according to a study presented today at the annual RSNA meeting.

"It make a big difference when we have a physically printed 3-D model for creation of surgical landmarks so the surgeons know exactly where to start the incision in order to get into the sternum and they know exactly where to cut the liver in order to get into the a vascular zone," Dr. Rajesh Krishnamurthy, the study's lead author and chief of radiology research and cardiac imaging at Texas Children's Hospital, said in a press conference. "These important steps of surgery were completely guided with the 3-D printing process."

Conjoined twins occur once every 200,000 live births and separating them is a delicate and risky procedure that requires extreme precision and care, according to the University of Maryland Medical Center.

Knatalye Hope and Adeline Faith Mata were born on April 11, 2014 connected from the chest all the way down to the pelvis. Krishnamurthy described it as one of the most complex separations ever for conjoined twins.

Before the surgery, Krishnamurthy and his colleagues conducted volumetric CT imaging and administered intravenous contrast to each twin to get better views of vital structures. They then used a technique called target mode prospective EKG gating to freeze the motion of the hearts on the images.

The team found that the twin's hearts were in the same cavity but were not fused. They also found a plane of separation of the liver that they would be able to use during surgery.

The team then translated those results into a color-coded 3-D model that they generated with a 3-D printer. It was complete with skeletal structures and support made in hard plastic resin and organs constructed with rubber-like material.

The twin's livers were printed as separate parts of the transparent resin with major blood vessels shown in white to make them more visible.

A team of over 26 clinicians, including 12 surgeons, six anesthesiologists and eight surgical nurses, began the surgical separation of the twins on February 17. The twins were officially separated about 18 hours into the 26-hour surgery.

"We looked at the finding on the 3-D modeling and we come back to actual results in surgery, and there were no discrepancies between the two, so we pretty much predicted every relevant abnormality prior to surgery," said Krishnamurthy.

He expects that the combination of volumetric CT, 3-D modeling and 3-D printing will become a standard part of preparation for surgical separation of conjoined twins. However, hurdles still remain in the way of adoption including the lack of reimbursement.

The 3-D model was also useful in helping the parents understand the process. Krishnamurthy said that when the mother held his hand and thanked him, she mentioned it was the first time she understood what was going to happen to her children.

The twins have recently come back from follow-up and they are doing well but they still have some orthopedic issues to deal with.

"We showed that improved visualization can be achieved using 3-D modeling and it becomes particularly relevant when you are dealing with complex scenarios like this one," said Krishnamurthy.