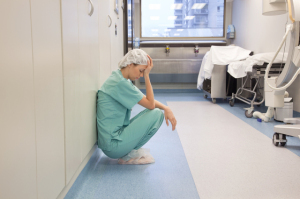 Do we need more evidence
that physicians are overworked?
Two studies – known as iCOMPARE and FIRST - seek to evaluate such factors as patient mortality rates between two control groups of medical residents working different length shifts. Some of the participating residents have reported 30-hour shifts without sleep.

The situation has pitted health care policy and medical student groups against some big-name medical schools.

“The studies are unethical in several regards,” Dr. Michael Carome, director, Public Citizen’s (PC) Health Research Group, told HCB News. “First and foremost, the
research involves more than minimal risk to both the residents and patients who are the subjects of the research.”

Carome cited the effects of sleep deprivation among the residents in one of the control groups. He noted that sleep deprivation exposes medical residents to increased risk of motor vehicle accidents, needle sticks, blood-borne, and depression. And he added that tired residents are more prone to making medical errors, which puts patients at risk for increased injury or death.

The American Medical Student Association (AMSA), a nonprofit that represents more than 40,000 medical students, also objects to the two studies according to Joshua Caulfield, executive director at AMSA.

AMSA and PC recently sent a joint letter to the Accreditation Council for Graduate Medical Education (ACGME), a private nonprofit that reviews and accredits graduate medical education. The two groups call for ACGME to rescind its waiver of duty-hour standards that allowed the studies to proceed.

The studies affect medical residents at up to 63 internal medicine residency programs, and surgery residents at 166 hospitals. Carome said that he has discussed the studies with two first-year residents, who consider such research unethical. One cited the lack of informed consent among the residents who have been placed in such studies.

“This NIH-funded study began because there is considerable concern among experts in the field that the current duty-hour system of residency education may limit the nation’s ability to train physicians effectively. The study results will provide much-needed evidence to assist policy makers in making informed decisions on this important clinical and educational issue,” said Susan Phillips, senior vice president of public affairs at Penn Medicine.

The issue of medical residents’ long shift hours rose to prominence in 1984 with the death of Libby Zion, a college freshman in New York. Medical residents managed her care. Her subsequent death was attributed to fatigue and inexperience among her attending medical residents.

This prompted multiple rounds of new regulations to reduce medical errors caused by work-shift length. The latest of these, regulations laid out in 2011, were waived by ACGME to allow the FIRST and iCOMPARE studies to proceed.