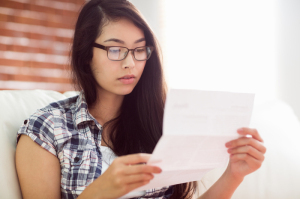 What we have here is a
failure to communicate
More and more U.S. states are passing legislation requiring hospitals to share breast density information with patients — but new evidence suggests these notices are often difficult to comprehend and therefore largely ineffective.

Women who learn they have fibrous and glandular breast tissue — dense breasts — are at risk of not seeking proper follow-up because of a lack of simple, standardized language in notification letters. A study published this week in the Journal of the American Medical Association (JAMA) said the notification letters sent out to patients following mammograms are sometimes written at a post-graduate level.

“We know that an estimated 40 percent of women have dense breast tissue that may mask the presence of cancerous tissue in standard mammography,” Dr. Rachel Brem, a board-certified radiologist and Director of Breast Imaging and Intervention at George Washington University Hospital, told HCB News. “It is important that patients fully comprehend [the letters] so that they have a better understanding of their risk for developing breast cancer, and whether they might benefit from additional screening.”

Laws in many states require that patients be notified in writing of a finding of dense breasts. Just this week, Oklahoma became the 26th state to mandate such notification. However, according to the study authors at the Health and Healthcare Disparities Research Program at the Boston School of Medicine, about 20 percent of the U.S. population reads below a fifth-grade level.

The study found the letters where on average too complicated and inconsistent from state to state. The literacy level of the notification letters ranged, on average, from at or above a high school reading level. The letters also varied widely in a call-to-action for patients. Some letters mention increased cancer risk while others suggest additional, advanced screening, such as ultrasound or MR. Still other letters just inform the patient to consult with their doctor.

“We need to develop a uniform way to communicate breast density results to patients,” said Brem. “Currently the guidance on what to include in these communications differs from state to state.”

She noted that if these laws eventually become federally mandated, perhaps these letters would become more uniform.

Brem said that even without a notification mandate, patients should always to talk to their doctor.

“I have seen first-hand how dense breast tissue can make it more difficult to find cancer in standard mammography,” she said. “Any guidelines related to communications with patients about breast density...are intended to create a dialogue that can help more patients get the information they need to make informed decisions about their treatment.”