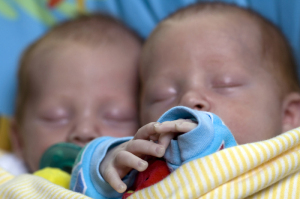 High-intensity focused ultrasound (HIFU) is already being used to treat prostate cancer and uterine fibroids, but it may also be useful for treating a life-threatening complication that affects some twin pregnancies.

Twin-Twin Transfusion Syndrome (TTTS) causes one baby to grow much larger than the other because of abnormal vessels in the placenta. Some identical twins share a placenta and the blood vessels carry equal amounts of oxygen and nutrients, but with TTTS the more blood flows to one baby and deprives the other.

This syndrome is rare (occuring in about one to three per 10,000 births, according to the Society for Maternal and Fetal Medicine) but it can lead to complications such as premature birth, handicap or even death of one or both babies.

For severe cases, the standard treatment involves a laser that destroys the abnormal blood vessel so each baby has a separate supply of oxygen and nutrients. But it's a risky procedure that can lead to infection or miscarriage because a small hole needs to be made in the womb.

Researchers at Imperial College London and the University of Cambridge tested the HIFU technique on anesthetized pregnant sheep, since sheep placentas have blood vessel structure similar to that of humans. Five of the sheep underwent the HIFU procedure and six had a placebo procedure.

They demonstrated that the technique is effective at destroying blood vessels without damaging the fetus, and potentially halving the abnormal blood flow between the babies. They used a HIFU probe against the wall of the uterus, through an incision in the abdomen, and carried out additional experiments to show the procedure works through the skin.

The researchers will continue to develop the HIFU procedure along with The Institute of Cancer Research, London. They are hoping to conduct human trials in the near future, to determine if these results can be translated in a clinical setting.