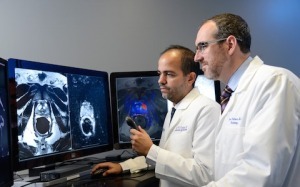 The researchers found that the procedure improves the detection of clinically significant prostate cancer.

He said that moving forward, the research team — also composed of physicians from the urology and pathology departments at UT — will need to better evaluate the method in other patient populations. This includes determining MRI-TRUS diagnostic performance on the basis of outcome factors, such as disease-free survival and cost-effectiveness.

The researchers have partnered with colleagues in Brazil to conduct two follow-up studies.

"Our work also highlighted its (MRI-TRUS) robustness and consistency," he said. "With these results replicated when using different imaging protocols — such as studies done with and without endo-rectal coil — different image fusion devices, as well as various radiologists and urologists with different levels of expertise."

He added that the use of the MRI-TRUS fusion biopsy has demonstrated that it is a good option for men with high clinical suspicions for prostate cancer, which include elevated and rising PSA blood levels and abnormal digital rectal exams.

The fused MRI-TRUS image creates a 3-D model, and flags anomalies that could be areas of concern. That helps guide urologists to select biopsy samples to determine whether cancer is present and how severe it may be.

"Patients diagnosed at a later stage of disease, or with a more aggressive cancer, have lower rates of survival, making it vital that we quickly identify those who are at the highest risk," said Claus Roehrborn, Chair of the UT Urology Department and a member of the MRI-TRUS study team.

Another team at Virginia Commonwealth University Medical Center is also using a MRI-TRUS method to obtain random tissue samples from 12 cross sections of the prostate to diagnose prostate cancer.