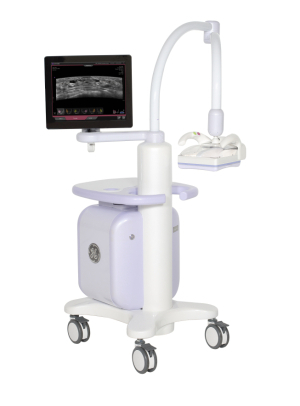 GE Healthcare's Invenia ABUS system
It's well known that mammography alone leaves much to be desired when screening patients with dense breasts, but for those patients new research suggests a unique ultrasound solution from GE Healthcare may offer considerable benefits.

Automated Breast Ultrasound (ABUS) distinguishes cancer by dark areas in dense breasts on an ultrasound, as opposed to the all-white contrast in digital mammography â which has been described by radiologists as "like trying to find a snowball in a snowstorm."

In an analysis entitled the European Asymptomatic Screening Study, 1,668 women between the ages of 40-74 were evaluated with ABUS in a 15-minute exam after undergoing digital mammography screening. The results showed a 57 percent relative increase in cancer detection.

"It provides amazing information that is not seen on regular hands-on ultrasound," Dr. Brigitte Wilczek, M.D., Ph.D., chief doctor for the Mammography Department at Saint Goran's Hospital in Stockholm, Sweden and lead researcher, told HCB News. "We know that screening could be improved by using additive tools in dense breasts. ABUS is such a very appealing tool. In our study it was possible to implement to our service screening, increasing cancer detection and maintaining a very acceptable recall rate."

The findings were equivalent to 6.6 cancers detected per 1,000 women, compared with 4.2 percent of those who received mammography alone. 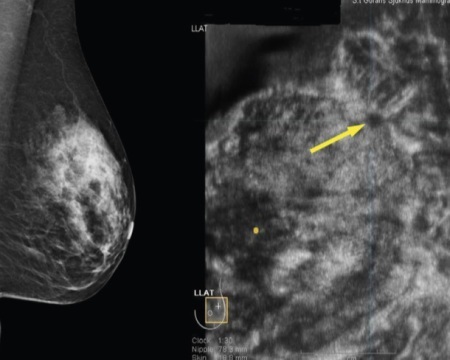 The results were recently published in the European Journal of Radiology. The newest generation of GE Healthcare's Invenia ABUS system was showcased at the European Society of Breast Imaging in Paris at the end of September.
1(current)
2