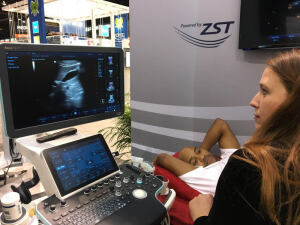 Called the Resona 7, the new platform, which the company says acquires high-quality images much faster than conventional ultrasound, was introduced at RSNA 2016.

“We are now able to merge and leverage these technologies to come up with a really unique ultrasound imaging platform in the industry,” Jim Baun, clinical marketing manager for ultrasound at Mindray, told HCB News — and the company believes it’s ZST that really differentiates it from everything else.

Baun explained that with ZST, the image is built pixel by pixel instead of line by line, as with the beam forming technology used in traditional ultrasound, making image acquisition 10 times faster.

“With ZONE Sonography, we flash a strobe light of ultrasound, capture the returning data and then using proprietary, high-speed, high-capacity digital signal processing methods, we take that data and then we build the image dot by dot,” Baun said.

According to Baun, this approach to image creation yields other benefits too.

“The competition can only focus at one, or two, or three, or four given depths, depending on how the operator adjusts it,” Baun said. “But if you can focus at five levels, that leaves 495 levels that you’re not focusing at, because each image is about 500 pixels deep. ZST is focusing every pixel, every frame, every time, as opposed to conventional beam forming, which has limitations on the levels that they focus at. So, our images are always in perfect focus.”

All of this gives the system potential to perform complex analysis on the acoustic data set.

“Say a woman has a lump in her breast,” Baun said. “Now, you have a mammogram, you find a lump, then you have an ultrasound and see if it’s a cyst or solid. If it’s solid, then the woman has to have a biopsy. It kind of helps narrow it down. But the potential with this is to take that acoustic data set and analyze the characteristics of that lump and to be able to tell if it’s benign or malignant.”

Other features of the Resona 7 include a 12.1-inch touch screen and adjustable control panel.

The Resona 7 received 510(k) clearance a year ago and the company has been selling the system overseas, but decided to refine it before releasing it to the North American market.