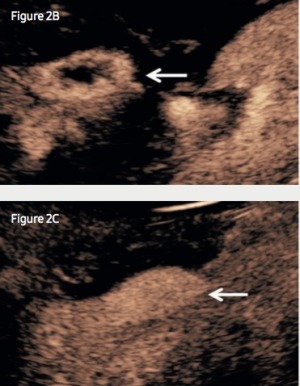 #RSNA16
Physicians from the U.K., Canada and Italy presented case studies from their use of contrast enhanced ultrasound (CEUS) at the RSNA meeting in Chicago.

The procedure, which was OK’d by the FDA this year for liver screening, but is currently not approved in the U.S. for cardiac disease, shows particular value in imaging children who may otherwise have to undergo a CT scan, and face exposure to the radiation that accompanies it.

Dr. Paul Sidhu, a radiologist and professor at King’s College in London, made the case that adopting CEUS is as much a philosophical choice as clinical.

“One of the main reasons to adopt CEUS is to reduce radiation burns that we seem to inflict upon our patients,” he told a large Monday morning audience at a Samsung-sponsored event.

He noted the use of CT scans in the U.S. has risen from about three million in 1980 to roughly 80 million in 2015. This is troubling, he noted, as it’s estimated that between 1.5 and 2 percent of cancers, including leukemia, in the U.S. may be attributed to organ dose radiation from CT exams. CEUS offers a radiation-free alternative to CT scanning in diagnosing liver ailments and injuries.

Based on his experience, he said that CEUS has several advantages over CT, as well as MR. CEUS can be performed immediately, with no lab testing. It is also portable and can and it can be conducted at multiple locations, such as the bedside, operating room or in the CT suite. It also operates and provides results in real time, allowing rapid changes to be recorded.

He also reported lower adverse rates than for CT or MR.

The addition of a contrast line into a venous line does require two operators and the use of the contrast adds almost five minutes to the procedure, but according to Sidhu, the image study results are worth the trade-off. He cited a journal article that concluded: “CEUS and MR are of equal value for the differentiation and specification of newly discovered tumors in clinical practice.”

Another speaker at the event, Dr. Stephanie Wilson, professor of radiology at the University of Calgary, Canada, spoke about her one-week conducting these procedures using the Samsung RS80A with Prestige. She reported very competent diagnostic capabilities for cirrhosis patients and said that using color Doppler was especially helpful in liver diagnosis of obese patients.

“While none of these findings have yet been confirmed (due to the short amount of time she had the machine before the conference) ... I think the findings will be confirmed,” Wilson told the audience, adding that she would present these results and other findings on CEUS diagnostics at next year's RSNA meeting.

The final presenter, Dr. Vito Cantisani, an Italian cardiologist, presented findings on his success using CEUS in diagnosing different types of heart plaques (an application that is not currently approved in the U.S.). He noted that cardiovascular disease contributes up to 10 percent of deaths worldwide, and diagnosing plaques is critical in reducing heart attack and strokes.