Tips for improving satisfaction among radiology patients and their referring physicians 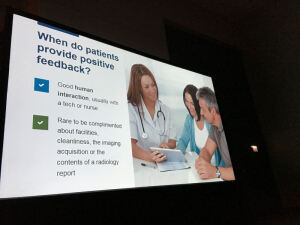 Simple things, such as eye contact and a positive attitude, can go a long way in improving patient satisfaction, said Olga Brook, a radiologist at Beth Israel Deaconess Medical Center in Boston.

Patients may complain if there’s a lack of private space when they are checking in, if they’re wearing open gowns in a public space, are not introduced to people performing the study or not given enough information about when the results of the study will be available, Brook said.

Referring physicians may also present negative feedback if their patient cannot get a study scheduled in time, the report is not available in a timely fashion, or if the physician isn’t notified about changes in reports.

Brook recommended conducting internal surveys, noting that internal data analysis is easier, as the practice understands the survey process better and has better knowledge about the data and its usefulness, including potential flaws and limitations.

Brook’s colleague, Dr. Jonathan Kruskal, chairman of the department of radiology and radiologist-in-chief at Beth Israel Deaconess Medical Center, noted that things that may seem trivial, and unrelated to the exam, can cause dissatisfaction among patients.

“Interestingly, one of the major bits of feedback we got from patients was that they did not like to see news on the television monitors in our waiting rooms,” Kruskal said. “They find that depressing, stressful and anxiety inducing.”

Kruskal also encouraged radiology practices to employ an internal feedback program to help improve the radiology reports. Feedback can include, for example, suggestions to enhance the specificity of the report or reduce glitches from voice recognition systems. Physicians and other staff, such as nurses, can provide feedback on radiologists.

It’s also important for practices to collect data to show to referring physicians.

Brook’s and Kruskal’s facility also uses “mystery shoppers” to make sure the correct actions are taken during an appointment.

“Get feedback, get the right data and manage it effectively,” Kruskal said. “You cannot manage what you don’t measure, and just because you can measure everything doesn’t mean that you should. … If you approach this in a logical way and manage the data, then you are adding value.”