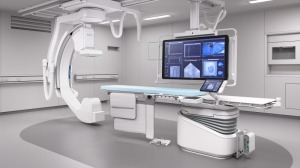 Philips Azurion
Philips just released Azurion, its newest angiography system, marking one of the biggest product launches for the company in the last several years.

Philips, which two years ago acquired medical device manufacturer Volcano Corp., is promoting the system as a next-generation image-guided therapy platform that will help hospitals increase productivity, shortening the time for procedures and lowering costs.

The image-guided therapy platform for interventional labs is the result of a multi-year development program conducted in close collaboration with leading clinicians in the field.

“It’s really a whole new generation of angiography systems,” says Bert van Meurs, business leader for image-guided therapy at Philips. “We see it as a change from a normal mobile phone to a smartphone.”

The platform, which can be used for a range of procedures, including minimally-invasive cardiac interventions, has its own operating system and can integrate other exams, such as preoperative CT images, as well as patient data in real time.

“It’s an open platform where we can integrate all the necessary information,” van Meurs says.

Azurion features a state-of-the-art ergonomic design with an easy-to-use intuitive user interface, enabling clinicians to swiftly and confidently perform a wide range of routine and complex procedures in the interventional lab.

The user interface allows clinicians to preprogram their own personalized settings to help reduce procedure time. They can also control the system next to the table, meaning they spend less time moving between the exam and control rooms.

The Azurion received FDA clearance last year — the only market requiring regulatory approval is China — and the company already has more than 20 systems installed around the world.