Philips' ElastQ Imaging gets FDA nod for use with EPIQ ultrasounds 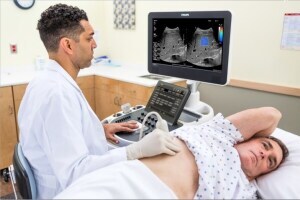 Will it replace liver biopsies?
Royal Philips announced early this week that its ElastQ Imaging capability received FDA clearance for its EPIQ portfolio of ultrasound systems. It can simultaneously image tissue and evaluate stiffness, which is critical for diagnosing liver conditions.

"The use of ElastQ Imaging shear wave elastography reduces, and in some cases avoids, the need for conventional liver tissue biopsies," Vitor Rocha, ultrasound business leader at Philips, told HCB News. "This is beneficial to both clinicians and patients by reducing the wait time associated with tissue biopsy and providing a more comfortable, less costly experience for patients."

In 2013, 29 million people in the European (EU) region suffered from a chronic liver condition and more than 30 million Americans had liver disease, according to the International Liver Congress.

Conventionally, those patients would be subject to a liver biopsy to determine the stage of liver disease and damage done.

The noninvasive ultrasound approach means forgoing the needles that are used for liver biopsies. The ultrasound exam results are also available immediately, which can help to alleviate anxiety patients might feel as they await test results.

According to Philips, its ElastQ Imaging shear wave elastography has a larger field of view than competitor solutions. It also color codes the quantitative assessment of tissue stiffness, provides real-time feedback and intelligent analysis, and quantitatively measures with multiple sample points.

ElastQ Imaging is part of the OEM's "ultimate ultrasound liver solution" called EPIQ Evolution 3.0, which also consists of PureWave imaging, fusion and navigation, and contrast-enhanced ultrasound, and will be on display at the ECR annual meeting in Vienna, Austria, later this week.