Infection control in the hybrid OR 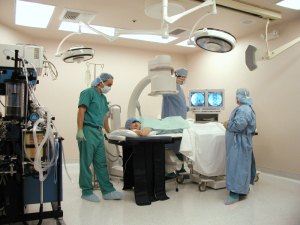 On any given day, roughly one in 25 hospital patients in the U.S. acquires at least one health care-associated infection (HAI), according to the Centers for Disease Control and Prevention. The CDC estimates that a staggering 1.7 million HAIs occur each year in the U.S., contributing to as many as 99,000 deaths annually. And with HAIs costing the U.S. health care system an estimated $20 billion each year, every effort within health care to reduce HAIs is also an effort toward reducing health care’s overall costs.

Concerns regarding HAIs are heightened in the operating room (OR) environment, with surgical site infections (SSIs) making up 31 percent of all HAIs among hospitalized patients. And anxiety over HAIs extends to the hybrid OR, where minimally invasive procedures are performed routinely in a growing number of hospitals. With the global market for minimally invasive procedures expected to double between 2012 and 2019, likely giving rise to a commensurate increase in those procedures, interest in HAIs in the hybrid OR won’t abate anytime soon. How can facilities combat infection in this surgical environment?

The most significant way in which hospitals can help curb infection within the hybrid OR is to consider the physical orientation of the room’s angiography system. A system that is fixed to the floor of the hybrid OR, as opposed to mounted on the ceiling or moving across the floor, is the best design choice to help reduce HAIs. Because infection in hybrid ORs is frequently attributed to an obstruction of air flow from the ceiling, a ceiling-mounted angiography system is not desirable. Floor-moving angiography systems also are problematic, as they can spread infectious material across the floor.

Floor-mounted systems were the standard when hybrid ORs debuted in the late 1990s. Those early image intensifier-based systems not only provided surgeons with the flexibility to place lights above the patient table, but they also enabled sterile airflow above the table. Then came the highly desirable form of imaging known as rotational angiography, which, on a floor-mounted system, could be performed only from the head side, limiting the field of view from head to diaphragm and preventing the imaging of abdominal aortic aneurysms (AAAs), particularly in taller patients.

Because they coveted rotational angiography, vascular surgeons began selecting ceiling-mounted angiography systems over floor-mounted units for the hybrid OR, despite ceiling mounts obstructing airflow, and positioning concerns regarding lights and booms with respect to the C-arm’s range of motion. These days, however, hospitals with hybrid ORs can select floor-mounted angiography systems that combine the benefits of a free ceiling (unrestricted airflow and improved light/boom positioning) with the kind of whole-body imaging coverage that once made ceiling systems preferable to floor-mounted systems.
1(current)
2