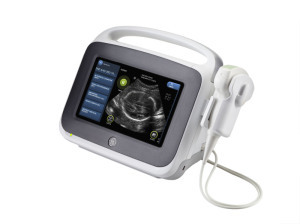 Vscan Access
An ultrasound device designed for expectant mothers in rural and developing countries is gaining traction as a popular tool in labor wards and delivery rooms in Europe.

European doctors are adopting and using GE Healthcare’s Vscan Access, a portable ultrasound system originally designed to help obstetricians and midwives in Africa and Southeast Asia, to monitor the health of their own maternity care patients and their unborn children.

“With Vscan Access, we found that the very features which make it ideal for rural Africa also make it suitable for labor and delivery wards in Europe,” Rob Walton, general manager of Primary Care Ultrasound at GE Healthcare, told HCB News. “For example, the product is designed to be intuitive (with a touch screen and preset workflows) to make it easy for new users to learn and quick to use - which is also essential in busy, fast-paced labor wards. Moreover, Vscan Access is portable, rugged, and operable on a battery to enable midwives to carry it to rural health centers in developing countries, but this also makes it ideal for bedside use and transfer between labor rooms in a hospital.”

Seventy percent of medical equipment designed for use in developed nations does not work in developing countries, according to the World Health Organization. The same, though, cannot be said for the reverse of this fact, an assessment that is further strengthened by the European adoption of Vscan Access.

Though specifically designed for obstetrics, it can be used for all types of abdominal scans and consists of several presets for scanning organs such as the liver, kidney and bladder. It also is used to monitor the mother’s bladder following delivery of the baby.

While GE believes that Vscan Access’ features will further increase adoption of the device, it is not sure if will become a standard tool, as ultrasound is not part of the typical work environment in all maternity wards. Further, it stresses that the tool is meant to assist but not take the place of traditional ultrasound systems.

“Vscan Access is not meant to replace the traditional, full-featured ultrasound equipment in developed markets,” Walton said. “However, we believe it can serve as a valuable adjunct tool in certain use environments like the labor ward. It could also be used in ambulatory settings, such as community antenatal clinics, or even for home visits by midwives, to provide basic scans and reduce the burden on secondary facilities.”

The device is not the only GE Healthcare ultrasound product new to the European market. Just last month, the company launched the new Productivity Elevated release of its cardiac ultrasound system.

Vscan Access is available for use in much of Western Europe, Africa and Southeast Asia. The product is not yet FDA-approved for use in the U.S.