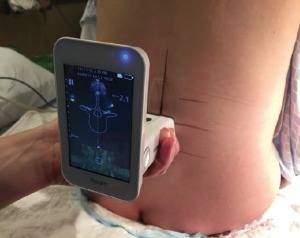 The most recent Stanford study will soon be published in Anesthesia & Analgesia. Another study conducted at the University of Virginia Medical Center yielded similar findings. The UVA study was published earlier this year in Investigative Radiology.

According to Will Mauldin, Ph.D., CEO of Rivanna, which developed the Accuro, without the device, up to 80 percent of first-attempt epidural needle placements fail. He said the device allows the anesthesia provider to more quickly and reliably implement neuraxial ultrasound. The studies found that the device functioned well on both obese patients and those with atypical spinal anatomy.

“Over a decade of clinical evidence and recent meta-analyses have revealed that neuraxial ultrasound, in the hands of expert users, improves success rates, reduces needle sticks, and improves safety,” said Mauldin. “However, performing neuraxial ultrasound with conventional machines is challenging, and studies show that using it competently requires a steep learning curve. Furthermore, accessibility of standard ultrasound equipment can be limiting.”

He explained that the Accuro device has proprietary technologies that overcome these limitations. Lightweight, portable, and untethered, Accuro weighs less than three-fourths of a pound, and can be used with single-handed operation.