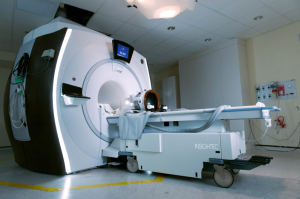 The study aims to test the efficiency of the MR-guided focused ultrasound device in reducing dyskinesia symptoms, characterized by uncontrolled, involuntary movement of the arms and legs, and improving motor function in patients.

“The goal is [that] if the study turns out favorably, then the FDA would consider it favorably if it could,” Howard Eisenberg, the chair of the department of neurosurgery at the University of Maryland School of Medicine and the principal investigator for the study, told HCB News. “It helps by having the FDA approve the protocol before the study starts, so their anticipated questions can be resolved before you commit a bunch of patients to a study.”

Exablate Neuro uses focused ultrasound to target and ablate tissue deep in the brain without the need for surgical incisions.

The trial will consist of 115 patients, with entry criteria based on the presence of dyskinesia symptoms and differences observed in patients between on and off periods during their time on medication.

"INSIGHTEC remains committed to advancing research to expand indications for our incisionless focused ultrasound technology to improve patient lives," Maurice R. Ferré M.D., chief executive officer and chairman of the board at INSIGHTEC, said in a statement.

The FDA approved Exablate Neuro in July 2016 as the first focused ultrasound device in the treatment of medication-refractory essential tremor.

The study is projected to begin at some point in 2018.