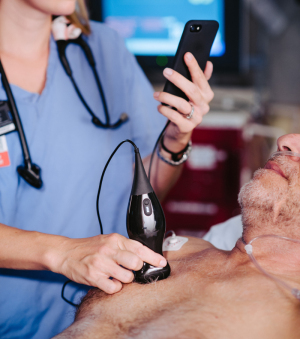 U.S. physicians will soon be able to begin ultrasound exams simply by reaching into their pockets and pulling out the new, FDA-approved Butterfly iQ, the first ultrasound-on-a-chip-based imaging system in the world, to plug into their iPhones.

Approved with 13 device clearances, Butterfly Network Inc.’s 300-gram handheld system connects with an iPhone to provide clear images for diagnostic purposes. It is set to go on sale in 2018 at a price of less than $2000.

"Beyond dramatic reductions in cost, the most significant benefit of our having put ultrasound onto a chip, is diagnostic versatility," Matt de Jonge, head of product at Butterfly Network, told HCB News. "Our single transducer can look almost anywhere in the body: heart, abdomen, superficial imaging and more. We expect users to take full advantage of this unprecedented diagnostic versatility."

Handheld ultrasounds can cost around $8,000 and full capability machines can range between $20,000 and $100,000, according to Forbes. Conventional devices also require large expensive carts or boxes that connect three or more piezoelectric-based transducers, each of which costs between thousands and tens of thousands of dollars.

The technology behind Butterfly iQ combines the capabilities of these probes into a single ultra wide-band, 2-D matrix arrangement consisting of thousands of microelectromechanical systems (MEMS). Directly overlaying these sensors is an integrated circuit that encompasses the electronics of a high-performing ultrasound system. The combination of acoustic bandwidth and the processing power of the MEMS and electronic fusion enables greater diagnostic versatility, speeds, modes and resolutions.

The system is designed as a silicon chip, allowing for greater production at a more affordable rate. It is paired with a HIPAA-compliant cloud that provides storage and collaboration among clinicians and offers connectivity with traditional hospital medical record systems. It also provides health care administrators with information on the use and return-on-investment of ultrasound in their workplaces.

"Our AI is designed to assist clinicians along two dimensions, which today, make ultrasound difficult to use image acquisition and image interpretation," de Jong said. "Our first AI tools, in both camps, will help clinicians asses cardiac health."

Butterfly iQ will not be intended for use by consumers at first. The company plans to unveil an android version sometime in the next year and will announce during that time any international clearances that take place for the device.