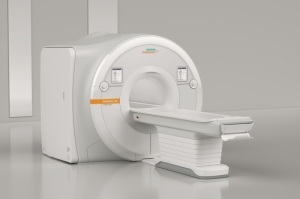 The 3 Tesla scanner is the first of Siemens’ MR systems to carry BioMatrix technology for assessing anatomical and physiological differences in patients, and expands precision medicine in ways that allow providers to reach greater outcomes at lower prices.

“BioMatrix technology is exclusive technology that aims to reduce unwanted variability in MR, particularly due to human differences,” Wesley Gilson, 3T MR product manager for Siemens Healthineers North America, told HCB News. “We have a suite of BioMatrix technologies that include sensors for automatically detecting respiratory motion; tuners; and a group of interfaces.”

Through its BioMatrix technology, MAGNETOM Vida can detect and monitor respiratory rates using sensors embedded into the patient scanning table, and is equipped with tuners that offer a variety of features, including improvements in image quality for more consistent saturation and reductions in rescans, and the use of distortion-free whole-body diffusion-weighted imaging for any patient regardless of their size, gender or any indications they may possess.

It also offers improved workflow through its group of interfaces which use intelligent body models to speed up and simplify patient positioning and enable easy transportation of large patients through the use of its eDrive-assisted motorized table. Workflow is further strengthened by GO technologies for easy, fast, reproducible positioning and by improvements in Day optimizing Throughput (DoT) engines which enable reproducibility in the imaging scan.

In addition, the scanner consists of a new magnet design, carries up to 60/20 XT gradient performance to support high-end clinical applications, and is equipped with Eco-Power technology that lowers costs of ownership over the lifetime of a scanner by deactivating components that drain power while inactive for long periods of time.

Gilson says the system is currently being installed at several locations throughout the U.S. and that he anticipates more to come because of its technological and workflow capabilities and the comfort it offers to patients.

“It’s amazing how well the system is being received in the field," he said. "I see a large number of systems being installed in the U.S. in the very near future.”

Mallinckrodt Institute of Radiology plans to use MAGNETOM Vida in clinical trials and research studies focusing on patients with cancer or neurodegenerative conditions, such as Alzheimer’s. It will also be used for cardiac imaging purposes.

It is CE marked and FDA approved.