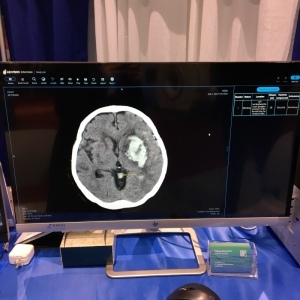 CHICAGO — Infervision is the first company to harness deep learning for radiology in China, and with its first visit to the RSNA annual meeting, the company is aiming to bring two new products to the U.S.

The company launched a lung cancer screening product six months ago and at RSNA debuted an artificial intelligence (AI) platform for detection and segmentation of hemorrhagic and ischemic strokes using CT.

The idea behind the lung cancer screening product, called the A.I.—Augmented CT Screening Solution (AI—CT), is to assist radiologists in what is often a tedious, repetitive process. The solution is integrated into the PACS system.

“It’s not a terribly difficult diagnostic problem, but it’s extremely tedious and extremely repetitive, especially when you do a diagnosis,” Kuan Chen, founder and chief executive officer of Infervision, told HCB News during an interview at the show. “In the morning, you feel energized and you can pay attention to the image, and do it very accurately. But maybe toward the afternoon, after you have lunch and you’re sleepy, then you can start to miss some of the very early signs and symptoms, for example ground glass nodules.

“It is definitely understandable for radiologists to have that because we are human,” Chen continued. “We are not wired to do repetitive stuff for more than 10 hours. But then, it’s not very understandable from the perspective of the patient. That’s why we have an AI system in which we actually detect the early signs and symptoms for the radiologist so that they can save time to do more advanced work.”

The AI CT stroke screening system, called Head CT AI Augmented Screening, helps radiologists and neurologists diagnose the type (hemorrhagic or ischemic), location, and severity of a patient’s stroke, and come up with a faster, more accurate volume calculation for intracranial hemorrhage. Chen said studies show a 45 percent overestimation of true hemorrhagic volume when done manually, for something that is an important indicator of mortality and an optimal treatment plan.

“On the one hand it’s a very important indicator, but on the other hand you are not able to do it very accurately by using this approximation,” Chen said. “That’s where AI can come into the picture.”

The solution can also determine ischemia directly from a CT image instead of a traditional MRI, avoiding the prep time for an MRI and allowing treatment to begin sooner.

On the regulatory front, Chen said that the company is in discussions with both the Chinese FDA and the U.S. FDA on how its products can be cleared for use, and expect their license from the Chinese FDA in a few months.

“When you have a CT or MR, you develop a product and it’s pretty much fixed, and you deliver it to the doctors,” Chen said. “One very strong characteristic of deep learning is that it keeps learning and it keeps evolving. It basically learns from new data and adjusts itself. It’s actually quite different as compared to the other products and systems that are regulated by the FDA.”

The lung cancer screening product is deployed for research at more than 50 hospitals in China, and the AI CT stroke system is deployed in four facilities. Chen said the optimal situation is to have the AI evaluated by radiologists who are familiar with the technology.

“We really want to measure and evaluate the AI when it’s in a long-term deployment,” Chen said, “not someone who is just trying it out.”