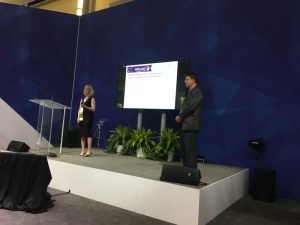 CHICAGO — Two authors of a study published in the current issue of Radiology on barriers to patient-centric care in imaging presented their findings at an RSNA session on Tuesday. The main take away: radiologists would like to spend more time with patients. But their frustration is that the continued emphasis on the RVU volume-based compensation system prevents them from doing so.

The survey, sponsored by RSNA, included a survey population of 5,999 radiologists and yielded a 12 percent response rate. While 71 percent of respondents agreed that it was important to be available to patients to answer questions, only 49 percent reported doing so. Workload was cited by 79 percent of respondents as the main barrier. Some 73 percent reported they would like to spend more time with patients to improve their personal sense of satisfaction.

“In this day and age so much is about data and outcomes, but I'm a private practice radiologist, and I don’t have the time to [implement] the study and research,” Dr. Jennifer Kemp, the lead author, who practices at Diversified Radiology in Denver, told HCB News. She said she gets why her colleagues struggle with patient-centric care. “I am overwhelmed – I worked 14 days straight before coming here (RSNA).”

She and co-author Dr. Max, Wintermark, professor of radiology and chief of neuroradiology at Stanford, led the discussion in the Discovery Theater.

Wintermark told the audience that it’s not just imaging patients who are their customers, but also patients in the ED - as well as the ED doctors themselves. This is especially true when there is a discrepancy in reads between residents, or over reads performed after the ED physician read, or even reads between radiologists. However, if radiologists get involved with talking to patients, they will often take the news better.

“Something that we (radiologists) have started to do is call the patient when we miss something,” said Wintermark. “It’s a little painful to do, a learning experience. But instead of the ED doctors telling the patient that the radiologist missed something, we instead tell the patient multiple people looked at the image. That gives us a little more control over the message, to make the patient feel better.”

Kemp advocates doing the little things that patients and referring physicians will appreciate – to have emotional intelligence about the patient’s point-of-view. This includes enlisting the rest of the imaging department to help with customer service niceties with information on parking, videos on what to expect, and providing the patients with a follow-up phone number to speak to a radiologist after their exam. She also said Facebook and Twitter are good platforms to engage patients.

The study also suggested that emerging reimbursement changes, such as those under ACO and MIPS models, would also encourage more patient-centric imaging care.