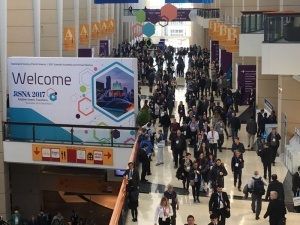 One may think the safety requirements for diagnostic MR and interventional MR (iMR) would be the same, but Krzysztof Gorny, associate professor of medical physics at Mayo Clinic, argues that there are distinct differences.

"iMR is usually a more complex practice than a diagnostic MRI,” he said at the RSNA meeting last Tuesday. “This has to do with the number of people involved in the procedures, additional equipment that's not MR-safe.”

A diagnostic MR exam only requires one technician and one nurse, but an MR-guided laser ablation procedure calls for about 31 people including technicians, anesthesiologists, radiologists, neurologists, technical support and physicists.

During the procedure, most of those people go in and out of zone 4 because they need to stand right next to the magnet to operate the equipment. Because of that, Gorny believes that MR safety training for all members of the team is imperative.

He recommends written guidelines and checklists pertaining to what happens during the procedure and who is permitted to walk into the exam room. In addition, he believes a designated safety officer is needed to control access to the doors to the equipment room and control room.

The equipment used for MR-guided cryoablation and laser ablation procedures, including laser generators, workstations, and cryogen tanks, needs to be taken into consideration. A handheld magnet can be used to determine if any of the equipment is not MR-safe.

Only MR-conditional equipment is permitted to enter zone 4, so adjustments need to be made to accommodate that. According to Gorny, Mayo Clinic implemented non-magnetic surgical lights, an MR-safe monitor, and a sterile area on the MR-safe cart.

If there is a need for a piece of equipment like a portable ultrasound scanner to enter zone 4, a clinical case must be made for it. At Mayo, the ultrasound was found to improve real-time applicator placements and shorten treatment time.

The ultrasound machine and power supply were found to be ferromagnetic, so they remained in zone 3, but the transducer was not magnetic so it was allowed to enter zone 4.

Gorny believes that the ideal solution is to have a dedicated iMR site that’s mostly used for iMR procedures and occasionally used for diagnostic MR, as needed.

"It's expensive, but all of the objects that are potentially MR-unsafe are now attached to the wall and cannot reach the scanner,” he added.